The Leabhar Breac - Reproduced in 1876

Shining a Light on the Original Ancient Manuscript 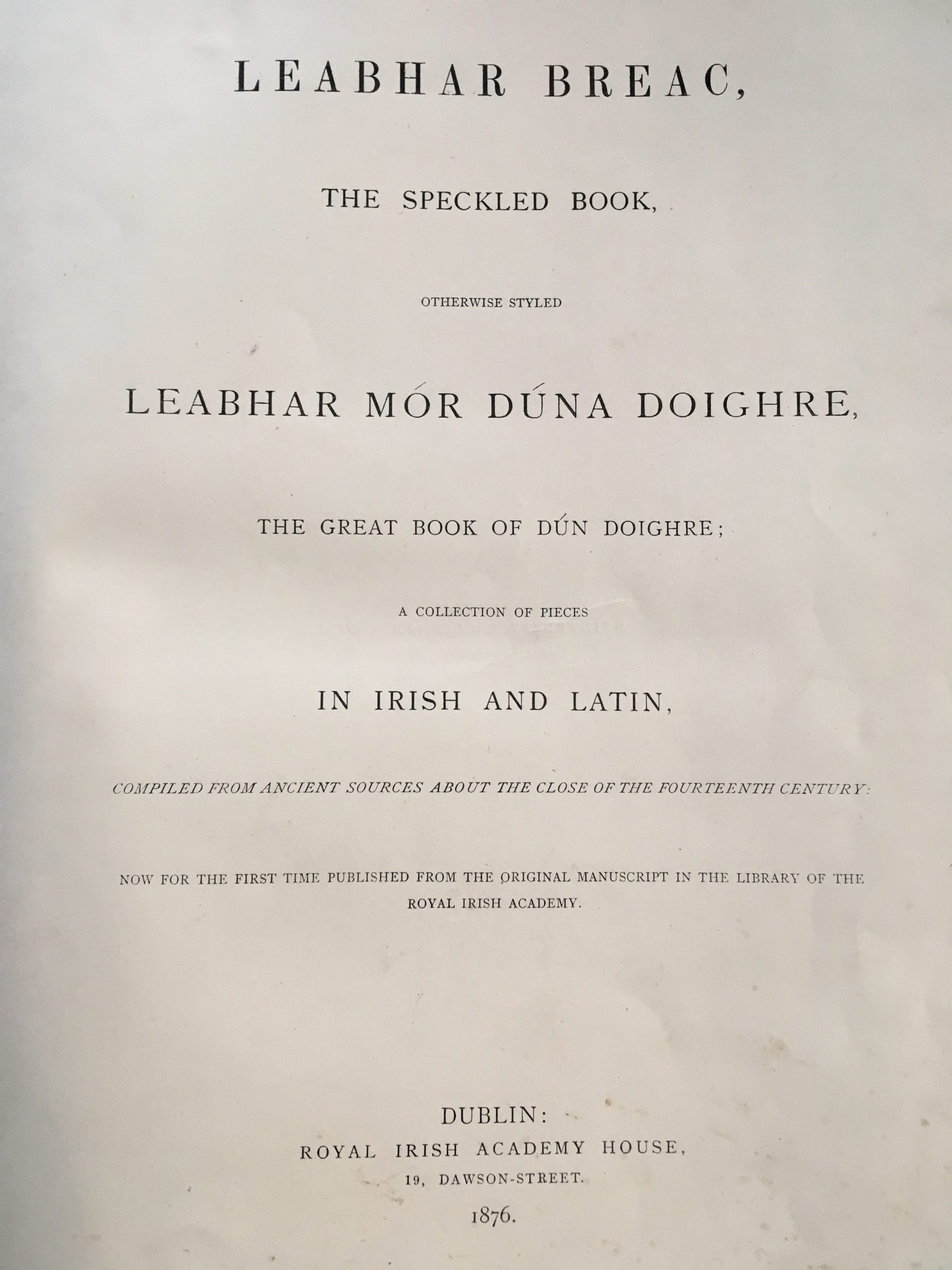 The Leabhar Breac – Reproduced in 1876

In the 1860s following the award of a special grant to the Royal Irish Academy by Her Majesty’s government for researches in connection with Celtic manuscripts, a committee of Irish Manuscripts was constituted to administer the fund.  In 1869 the librarian of the RIA made application to this committee for the publication of lithographed transcripts of some ancient Irish texts, one of which was known as the ‘Leabhar Breac’.  The idea was to provide copies of the oldest and best manuscripts of ancient Irish texts in their integrity and to make them available to Celtic scholars around the world.

In 1876 the Leabhar Breac was reproduced for the first time and published from the original manuscript held in the Library of the Royal Irish Academy in Dublin.  The preface in the reproduced ‘Leabhar Breac’ tells us that it was “printed from a transcript of the original, made by Mr Joseph O’Longan of the Academy’s Department of Irish Manuscripts and carefully collated by him in conjunction with Professor O’Looney, MRIA” and states that “every line corresponds with the original; contracted words and symbols of abbreviations are faithfully reproduced and the measurement of the writing on the pages agrees closely with that of the manuscript”.

All of the following titles –

The Speckled Book of Mac Egan

The Great Book of Dún Doighre

are names given to this large ancient folio manuscript, consisting of 131 leaves of Vellum each about 15 inches long and 10 inches wide and now belonging to The Royal Irish Academy in Dublin. 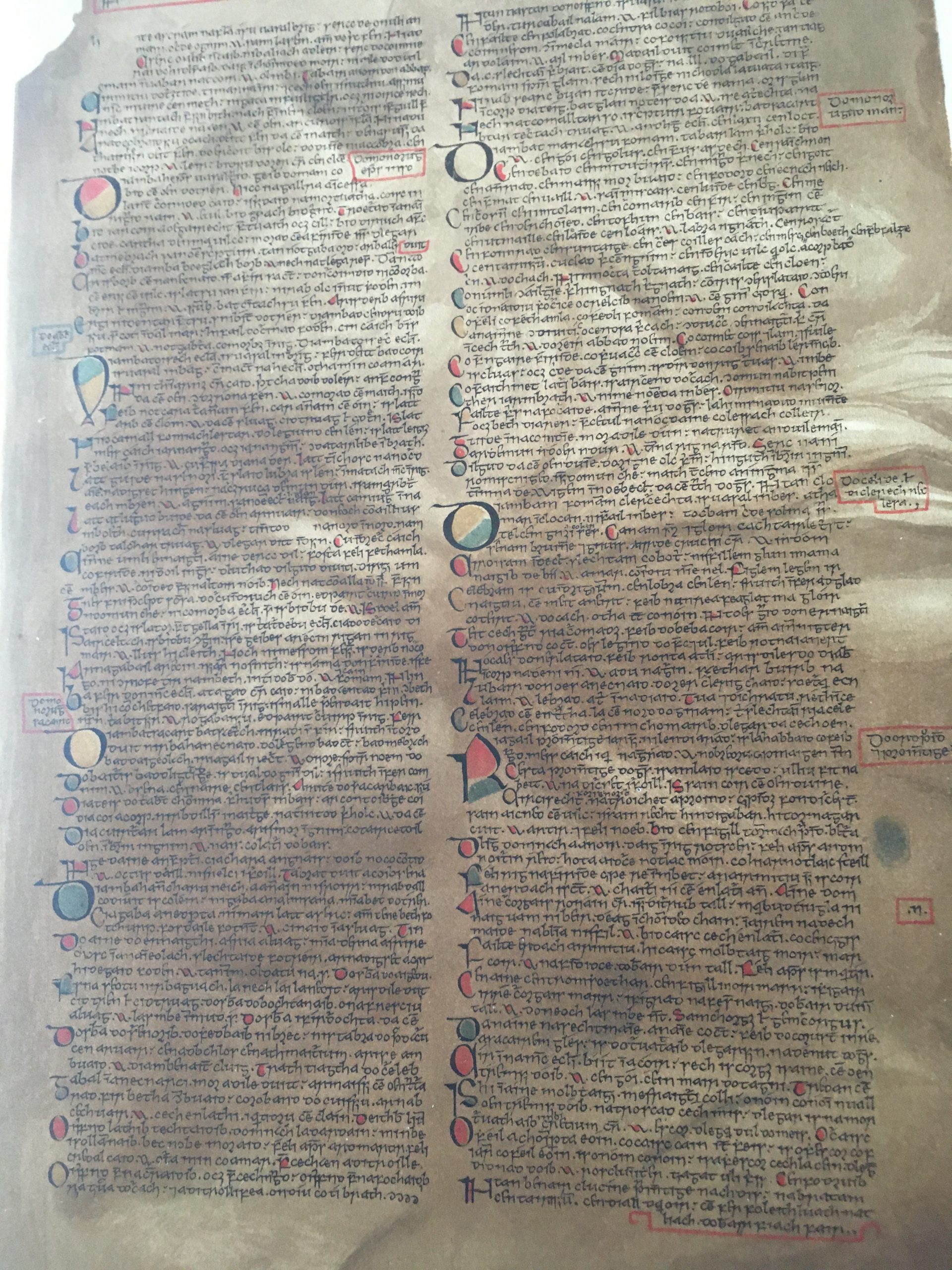 The reproduced copy of the Leabhar Breac sets out a comprehensive description of the original Irish manuscript and explains that the manuscript is a collection of writings in Irish and Latin compiled from ancient sources around the close of the 14th century.  The contents of Leabhar Breac consist chiefly of religious and devotional texts and include an epitome of the Old and New Testament; early Christian legends dealing with the lives of various saints including St Patrick, St Bridget and St Colum Cille; the ancient Irish law concerning the observance of Sunday; to mention just some of the contents.  The language of Leabhar Breac is Irish interspersed with Latin in some places.  The style and language of the Irish text is archaic while the Latin is often corrupt.

Leabhar Breac is a compilation from various older books held in the monasteries and churches of Connacht, Munster and Leinster.  It had been assumed, from evidence contained in various marginal entries and other references, that the compiler of the ‘Leabhar Breac’ was the work of some one of the Mac Egan family:

“one of the branches of the Ua Maine, of whom the chieftaincy belonged to the race of the O’Kellys and to which the O’Maddens, O’Donnellons, the O’Neachtains, O’Mullalleys and Mac Uallachans also belonged.” (Description of Leabhar Breac in the reproduced manuscript).

In his book, published in 1932, ‘Cineál Fhéichín agus Síol Anmcha’, Micheál Ó Conaill writing ‘as Gaeilge’ includes a chapter on the Leabhar Breac and in it he states:

“If a Mac Egan assembled the material for the book – and that is far from certain, – we now know, from the researches of Prof Tomás Ó Con Cheanainn – see Ériu 24 (1973) that the manuscript was penned by a scribe named Murchadh Riabhach Ó Cuinnlis, from Ballaghdacker in the parish of Athleague, mainly between 1408 and 1411”. (Translation courtesy Prof Nollaig Ó Muraíle).

From his own research, this is confirmed by Prof Nollaig Ó Muraíle who states that:

“Murchadh Riabhach Ó Cuinnlis, who assisted Giolla Íosa Mac Fhir Bhisigh in compiling and writing the Great Book of Lecan, wrote almost the whole of the Leabhar Breac – 142 leaves in total – and this was recognised by the late Prof. Tomás Ó Con Cheanainn almost half a century ago.  That means that this is the largest Irish language vellum manuscript that we know to have been written by a single scribe.  It was mainly written between the years 1408 and 1411 in various places on both sides of the Shannon – in east Galway, west Offaly and north-west Tipperary.  It is thought likely to have been compiled for the Mac Egan family, although its contents (mainly religious material – saints’ lives, sermons, a martyrology, etc.) would suggest that it was put together for a churchman or ecclesiastical community, but we have no certain evidence for that”.

Who Were The Mac Egans?

The Mac Egans were a family of hereditary lawyers, and branches of the family resided in different parts of Connacht and Munster.  In 1602, one branch of the family lived in a castle near the Shannon in the present parish of Lorrha.  Another branch settled near Tuam and another at Duniry.  Like other families of lawyers, the Mac Egans kept law schools at which part of the instruction given to students consisted in the copying of law manuscripts and books on other subjects.  It would seem that the Mac Egans always settled near an Abbey or Ecclesiastical Foundation and perhaps may have acted as lay teachers in them.

Records show that in the year 1629 the Leabhar Breac was held in the monastery of Cineál Feichín, in Abbey near Duniry.  This was confirmed in the writings of Micheál O’Cleary who had travelled to Duniry looking for material that he needed for his writing on the life of St Ceallach.  He thought he might find it in the Great Book of Duniry which he assumed was still to be found in the well-known centre of learning in Duniry.  What he found was a place famous for its learning now deserted and so he continued to the Monastery of Cineál Feichín in Abbey.  There he found the Leabhar Breac and when he had completed his work on the life of St Ceallach, he wrote in a memorandum at the end of his copy the following:

“In the monastery of the friars in Cinel Fechin, the poor friar Micheál O’Clery wrote this compilation, which treats of Ceallach, having compiled it from a history which treats of the wars of Connaught, out of the book which is called the ‘Book of Dun Daigre’ 3rd October 1629.”

Micheál O’Clery’s work on the life of St Cellach, is now held in the Burgundian Library in Brussels.

Other entries in the Leabhar Breac were made while it was in the Monastery of the White Friars or Carmelites in Loughrea when the compiler of the book had it there, probably for the purpose of copying some religious pieces also.

In 1789 the ‘Leabhar Breac’ was purchased by the Royal Irish Academy from Cornelius O’Daly of Mitchelstown for three guineas.  Researchers who have traced the history of the ‘Leabhar Breac’ from the time it was bought by the RIA back to the time of its compilation have concluded that:

‘Leabhar Breac’ appears to have been unbound from 1629 to 1789 when O’Daly sold it to the Academy where it was bound.  But as it was not paged and as whoever arranged the book for the binder did not apparently know much Irish, several of the loose staves and even single leaves have been misplaced.  The result of the misplacement is to make several pieces appear imperfect.  For example, the book began with the creation of the world and the description of Paradise but in the bound version this was included on page forty five!  However in the reproduced edition of ‘Leabhar Breac’ the misplaced pages have been restored to their proper place.

One benefit of the reproduced text is that the contents sets out the title or initial line of each entry and gives a translation to which is added a short statement of the nature and extent of the piece where necessary. 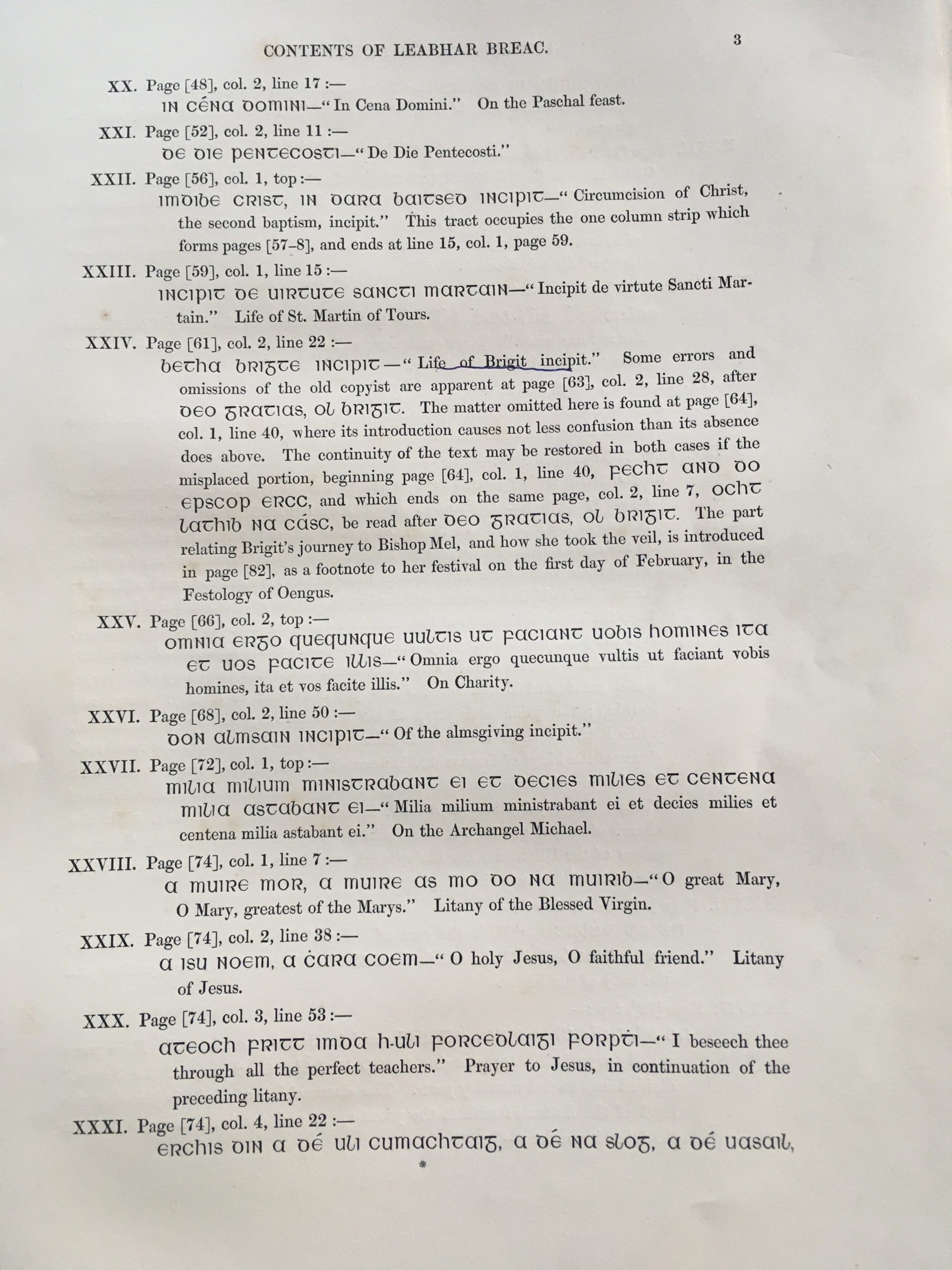 A Section of the Contents