The days immediately following the rising

To reach any of the Volunteer posts was difficult and attended by grave danger, as shooting was continuous night and day. Yet they managed to communicate somehow, both by word and letter with their friends outside. During the course of the week, I got from the nearest post three messages, hard to decipher now after the lapse of forty years, scribbled as they were hurriedly by pencil on any kind of paper to hand. The first is dated:

Could you possibly come down to us. We are intact so far but all the men and the brave girls who are with us express an earnest desire to see you. 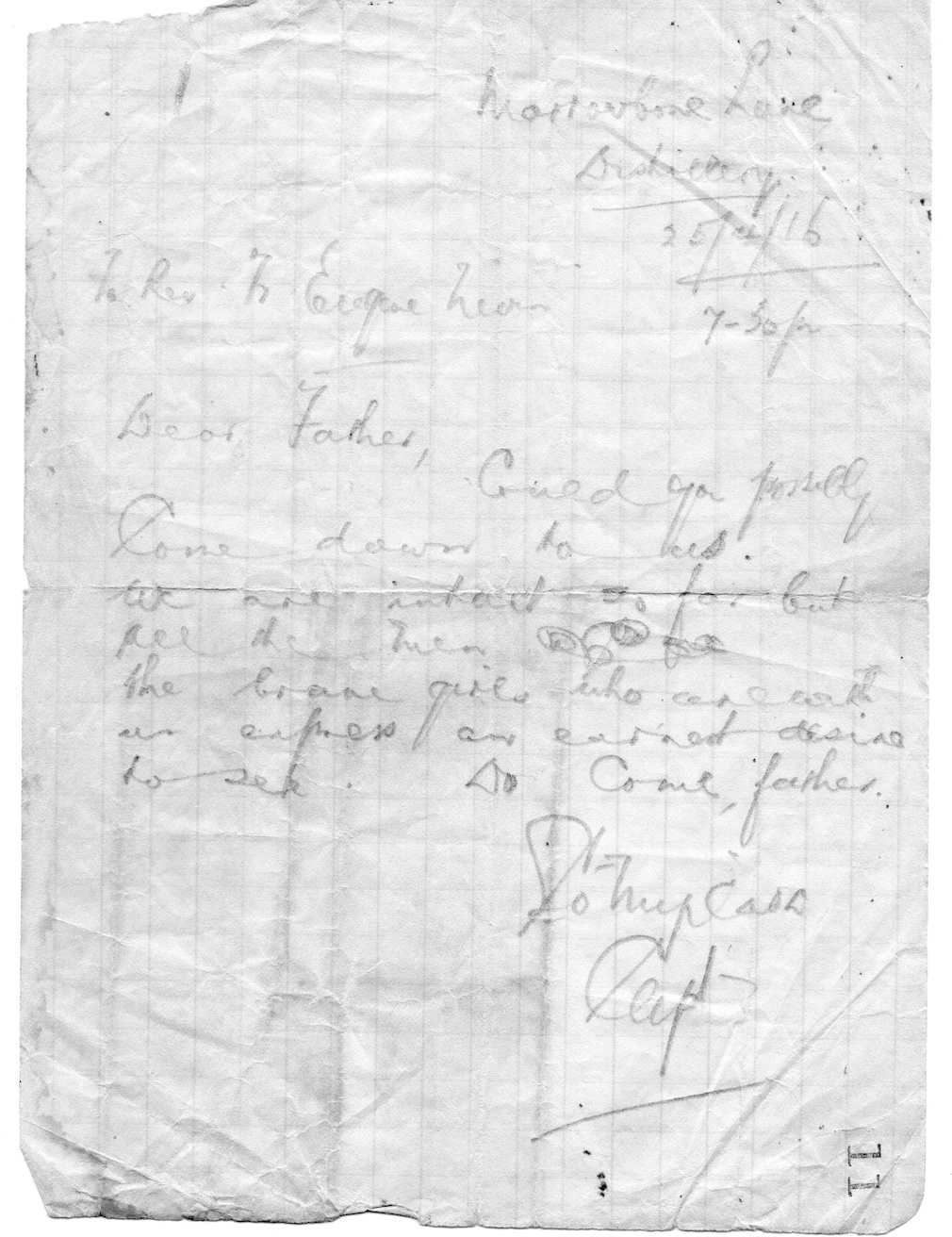 The matter seemed to me urgent because I knew some of them were taken unawares, thinking, especially in view of the countermanding order, that they were taking part in a customary afternoon route march, but now they were ‘in it’ decided to continue to the end. Having got permission for a few hours’ absence, and Father Kieran Farrelly volunteering to accompany me, we both set out about 10 o’clock in darkness for there was no gas or electricity. It was weird travelling, meeting few, with no sounds but that of the spasmodic and widely dispersed fighting: the shooting fairly distant and safe for the moment, but it won’t be for long as we near our destination, though it will be directed chiefly towards, not from the city. The Distillery situated mid a labyrinth of narrow winding streets and lanes would, to a stranger, be hard to find even in broad daylight but to us it presented no difficulty as we used often to cycle or drive through the locality as a short cut to the Kingsbridge Station.

Arrived at its big factory door, deep silence reigning inside, a knock brought forth the stern inquiry ‘Who is there’? Assured by the answer, the voice then said ‘all right Father, please wait just a few minutes’. The few minutes wait was, we knew to be utilised in preparation to resist a possible attack, for in war nothing can be taken for granted, there must be no risk overlooked where the enemy may come, in disguise of a friend assuming his name as well as outward appearances.

Presently we could distinctly hear the placing of the men at arms with the whispered words of command until the few minutes having elapsed, when suddenly as if by a powerful spring the big double door flew wide open revealing the whole interior. There confronting us, ranged in form of a half circle was a twofold line of defence, first line, fixed bayonets, second, rifles at the ready with a few miscellaneous figures in the background holding what looked to me suspiciously like Kimmage manufactured bombs: no precaution was neglected and one little word from friend Seamus, when in a twinkle? well! all would have depended on our past lives.

But the fateful word was not spoken, arms were grounded, tension was relieved and in quickest of time the big door closing behind us we were in the midst of the fortress’ defenders. There was a goodly number of them in men, boys and girls all enthusiastic, vying with each other in their eagerness to tell of the success they were having.

However, they all realised the dangers they were facing every hour and in consequence were anxious to be prepared for whatever might happen; so selecting what we thought suitable points among the vats we began to hear their Confessions to the accompanying sound of gun-fire. Most of them had been to the Sacraments recently but all decided to avail themselves of this perhaps the last opportunity.

When finished we remained on for some time having a talk with the boys; were shown over the building, the provision they had made for defence and their improvised commissariat in munitions and food. It was interesting and amusing in some respects even though overshadowed by what might happen to be tragic for many amongst them, but they were bright, cheery and confident of final success. I remember talking to a sergeant – three chevroned – who would fit admirably into the post in any European Army and be typical of the rank he held. Middle aged, I thought, and a trifle middle spread, he was engaged in the uncongenial task of making tea in a tank! I wished him every success, offered some wise ? suggestions as a help and in return was invited to wait for a cup. But as it was now the early hours of the morning and having to celebrate the Holy Sacrifice, the pleasure of enjoying the result of his experiment had to be thankfully declined.

The journey back to Mount Argus was uneventful, the days following far from being so. Besides the well known historic happenings, the wildest rumours abounded in the air keeping us for ever on the tender hooks oscillating alternately between hope and fear; now lifted up into the highest stratosphere, the next moment cast down into the deepest depths of despondency. A powerful German Army has landed somewhere in the South and is marching to the relief of Dublin. Whisperings of dire disasters have reached us from the City etc etc. The spreading of rumours in time of war should (and I believe used to) be a capital offense followed by summary execution.  And justly so.  People were constantly calling here seeking news about their boys sons or husbands and we were as much in the dark as they were. Poor Mrs Pearse called every day. Pat’s position being most difficult of all to contact nothing could be known of him.

Volunteer units were coming in from the country to join their battalions. At business in Dublin they had gone home for Easter holiday thinking there would be no ‘parade’ owing to the countermand, and now on their return they call for information we could not give as to where they might find their companions. I have often since reflected on the bravery of those boys, their patriotism, their fidelity to plighted promise and spirit of comradeship. They could have remained safely at home until the trouble was over but no, death before dishonour. They are brave boys disturbed now not by the dangers they are going to encounter in battle, they were prepared all along for that since joining the Volunteers but the disgrace of being courtmartialled for disobeying orders in face of the enemy which in reality they did not. Yet it was their one concern now as they ask for Confession and a blessing before departing for the unknown. As they knelt before me holding their feeble equipment for fighting against an Empire, the stripling David against the giant Goliah, I was forcible affectingly reminded of lines heard so often at Concerts and social gatherings – the well known words of ‘The Croppy Boy’ –

‘Now Father bless me and let me go

To die if God has ordained it so’.

It was touching, it was a tugging at one’s heart strings to see them as they get up and prepare to depart regardless of the dangers and possible death awaiting them in fulfilment of their duty to their native land and fidelity to their plighted word. Two of those boys I now know as honourable and substantial citizens of Dublin each with his own thriving business concern, married, with large families, one father of an excellent young priest.

The days were passing filled with historic, also some tragic events, rumours, but little reliable news from the seat of war, so near yet so far away. The scattered embers of burnt out Postal Orders and official documents blown from the GPO and thrown on the fields round here were confirmation, if needed, of the report that the Headquarters of our Army had been evacuated.

It is now Saturday of this never to be forgotten week and there comes in the early afternoon a second letter from friend Seamus:

Could we have Mass tomorrow do you think? You can certainly advise us and we would be thankful for anything you could do. We are here still, thank God, with no casualties as yet save a splinter wound, but many on the enemy side from our rifles. We are all in great spirit looking forward to the day of Freedom beneath the flag of the Republic. Thanks for Agnus Deis received. Please remember me to Fathers Gerald, Joseph and Kieran. 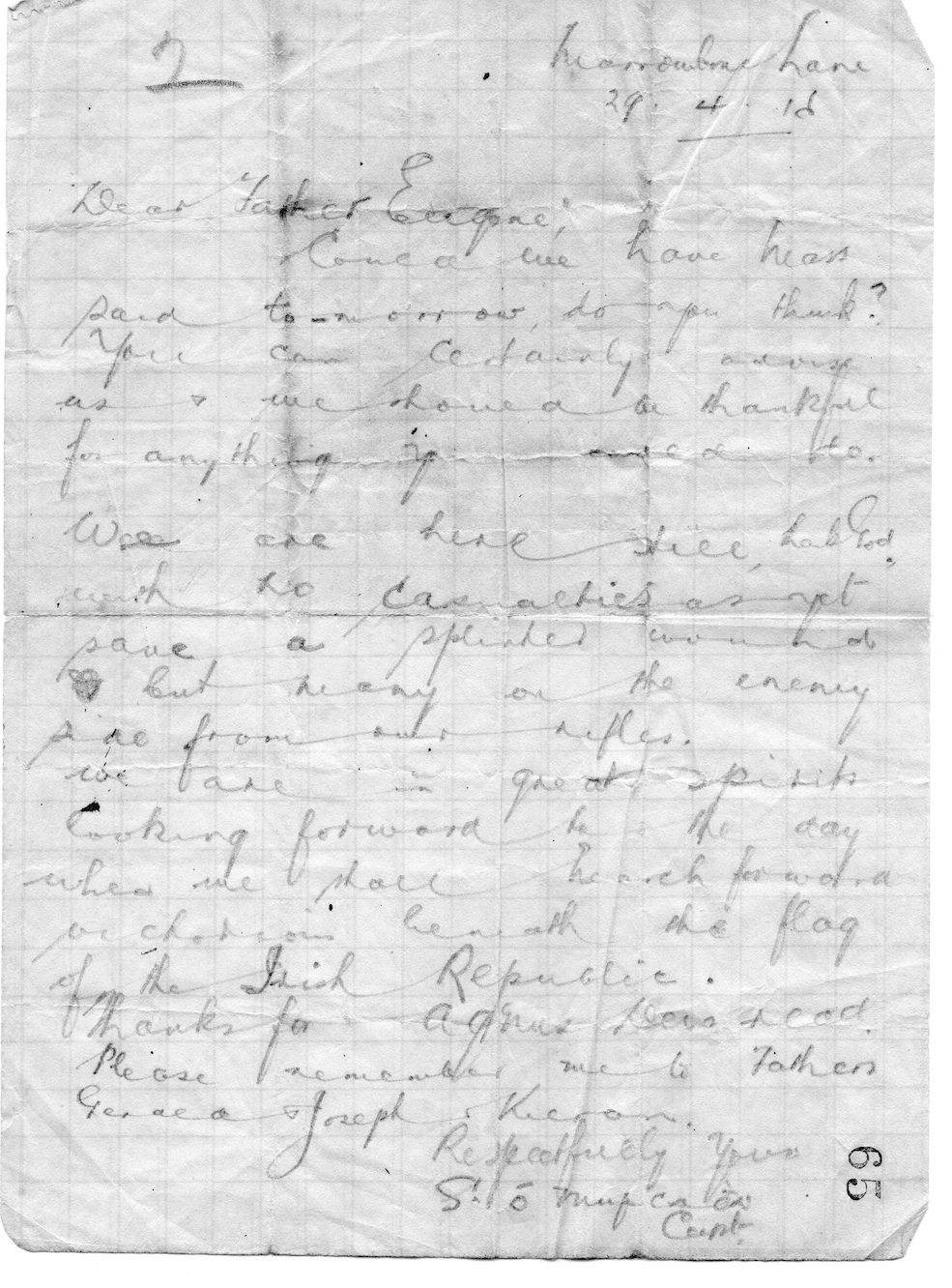 It was manifest he didn’t appreciate the difficulties, I might say, the impossibility of having the Holy Sacrifice offered there on the morrow. The location was so unsuited that, even in normal times, one would feel uneasy in approaching Ecclesiastical Authority for the required sanction. But knowing that the boys and girls there with Seamus himself, would have qualms of conscience about non-attendance at Sunday’s Mass, I sent word that the circumstances cancelled the obligation, and they were to say the Rosary as a substitute round about 12 o’clock which, I learned afterwards, they all did at Seamus’s invitation. Yet – early that morning a short note came:

I wonder if a message I sent you yesterday was delivered. It contained a request to you to advise us as to whether it would be possible to have Mass said here today. We earnestly hope you can do something for us in a push – a direction. Still hold the Fort! 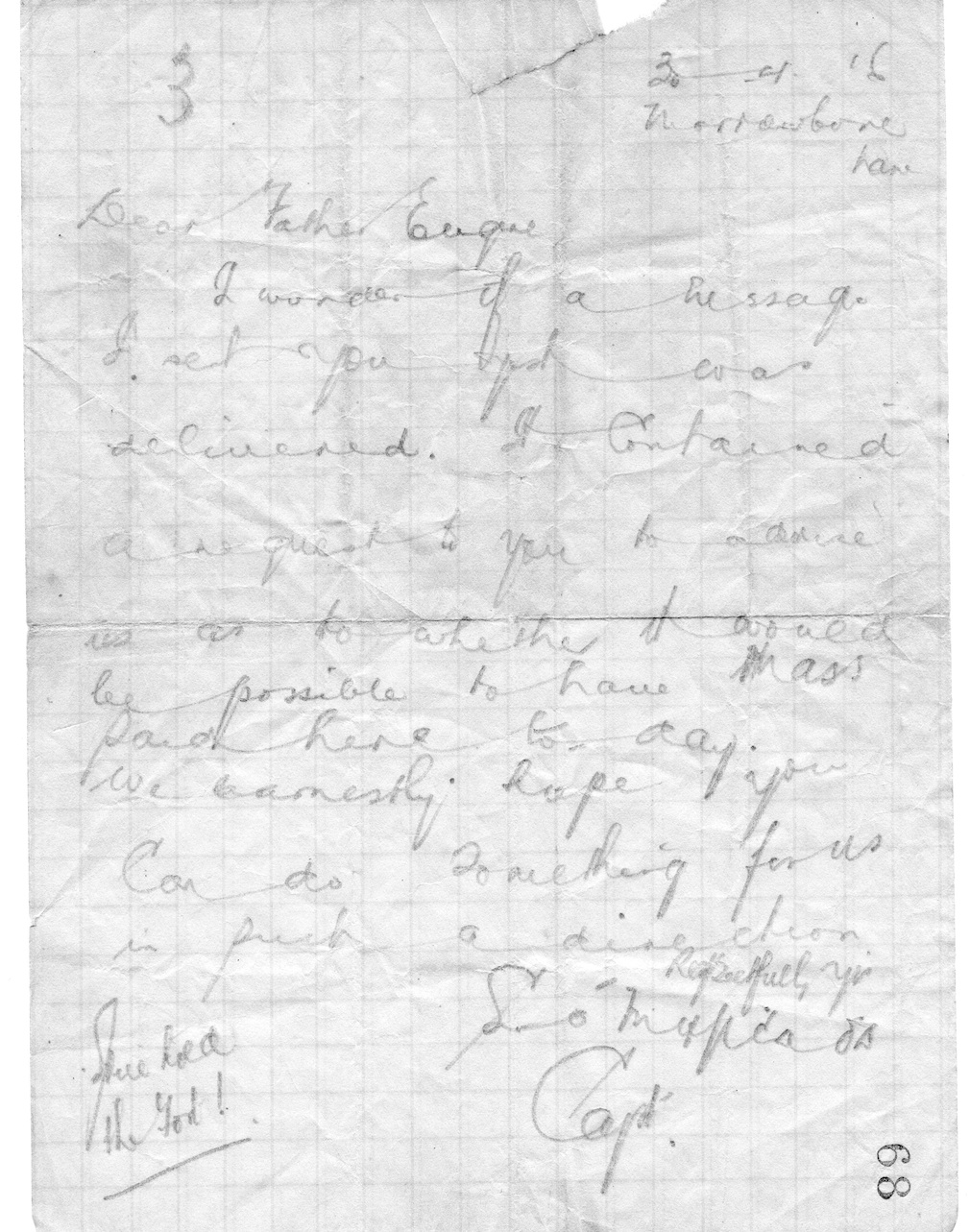