The Duniry-Cappagh River drains the audit area along its eastern border with several small streams, arising from natural springs, entering from the west along its length. One of these streams is known locally as ‘the Abbey River’. It extends from its source in Ballyglass townland, flowing through the village of Abbey and entering the Duniry River north of Conicar Bridge.

The ‘Ballygowan – Brookville’ River, an upland eroding stream, flows from the Slieve Aughty uplands across the southern section of the audit area to be joined by several drainage streams in Kylemore Bog before entering the Cappagh River at two points – one below and one above Cappagh Bridge.

The Duniry-Cappagh River floods on a seasonal basis forming ‘callows’ in the townlands of Conicar and Kylemore. The callows were divided in the early years of the 20th century into sections known as ‘the meadow callows’ and ‘the grazing callows’. Due to the prevalence of rock beneath the surface of the grazing callows section – this area was not suitable for hay production and was thus distinct from the meadow callows. Each year the hay was saved before the expected ‘Lady Day Flood’ (August 15th) by means of a ‘meitheal’. Each of the local families owned a strip of the callow land but they worked together to save the hay. The families who owned land on the Conicar callows were the Moloneys, Donnellys, Cosgraves, Finnegans and Joynts. Each of these familes lived in an area knows as the ‘Paircin’ located in the southwest of Conicar townland (opposite to where John Donnelly’s house is today).

Within the audit area, two bridges transverse the Duniry-Cappagh River. 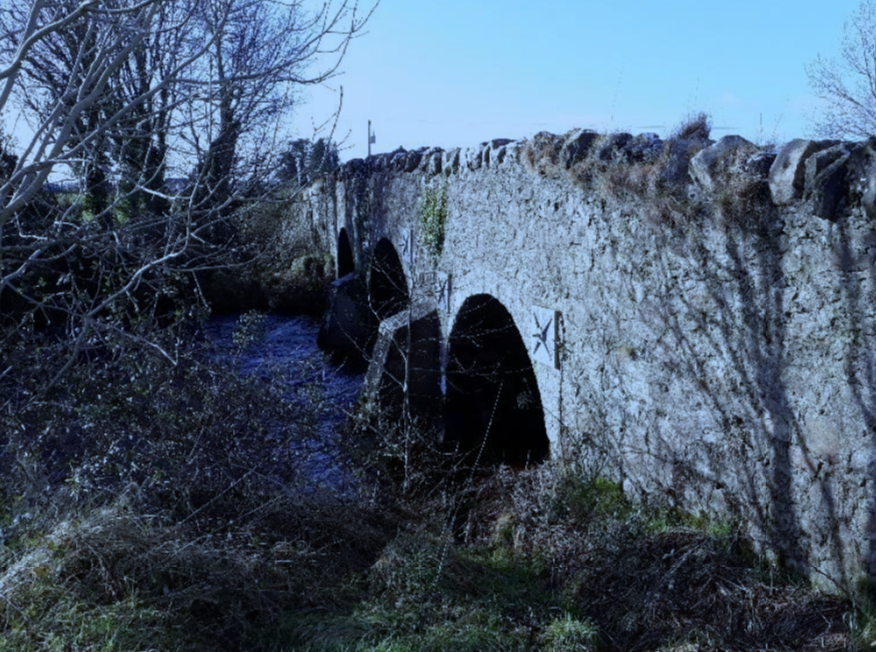 The most northerly bridge is a triple-arch road bridge known as ‘Duniry Bridge’. It is a protected structure recorded in the Record of Protected Structures (RPS) for County Galway and the National Inventory of Architectural Inventory (NIAH). Built c.1800 with local rubble limestone and occasional sandstone, there appear to have been several repairs made to the bridge overtime. The parapet walls on each side are in contrast. Those on the east side have vertical rubble limestone copings, while those on the west have curved rendered copings. The water passes beneath the bridge through three round-headed arches with tooled limestone voussoirs and plinths. On the upriver east side of the bridge are V- cutwaters which prevent debris carried by floods becoming trapped. On the downriver (west side) are more recent rendered rectangular-profile cutwaters. Local information related that the Black and Tans dynamited a section of the bridge during the Civil War and this may account for the repairs to the upper walls.

The Duniry-Cappagh River was canalised c. 1865 and this event is recorded in the Geological Survey memoirs. This led to the removal of several feature along the river including eel weirs and a corn/tuck mill. Prior to the straightening of the river the nearest crossing point to Abbey was at Cappagh Bridge but following the canalisation, a bridge was constructed between Brackery South and Kylemore townlands. By the early 1900s this bridge was no longer in existence and the road at Conicar had been extended to the river and a bridge built here. John Donnelly, a local resident of Conicar recalls that this was a timber bridge. The present day concrete bridge at this point replaced the timber bridge when it was damaged during a storm in the early 1960s (J. Donnelly, Conicar resident, pers comm).

A small concrete bridge at Ballygowan replaced a set of stepping stones across a low ford in the river at this point allowing access to Ballygowan mill. The footsteps are still evident in the stream.

A low stone bridge originally carried the road over a small stream in Kylemore townland. It was known as ‘Friar’s Bridge’ as it was associated with the story that one of the Friars from Kilnalahan Abbey hid beneath it during the Cromwellian Wars, when the Friars were forced to leave the Abbey. In recent years, the bridge was removed and replaced with a concrete culvert pipe.