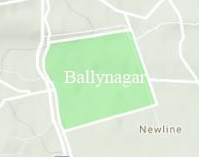 O’Donovan’s field name books (1838) states that the standard name for the townland is Ballynagar and its Irish form is Béal Átha na gCarr. The translation of the name is given as ford, opening, approach and mouth. O’Donovan’s field name books states that there is a reference to Ballynagar in the following documents:
Inq. Temp. Eliz., Hyath. Clarke, Esq., Larkin’s County Map, Grand Jury Presentments and B.S. Sketch.

There were no records for this townland.

The Tithe Applotment Books were compiled between 1823 and 1837 in order to determine the amount which occupiers of agricultural holdings over one acre should pay in tithes to the Church of Ireland. The land was measured in Irish acres or plantation acres at the time and this equated to 1.6198 English acres.

There was 1 proprietor in the townland at this time, namely: J M Aylward.

According to the Tithe Applotment Books, J M Aylward held 67 acres of land which was occupied by Herbert Nugent. The following is an account of his landholdings, the value of their acres, the amount of composition of the tithe and how this was dispersed among the church hierarchy:

The N Form shows that there was one inhabited house at the time of the 1901 census with 10 inhabitants.  There were 6 males and 4 females . Six of the occupants were Roman Catholics and the remaining four were members of the Church of Ireland.  The head of household was John M A Lewis. The occupants were born in County Galway, County Dublin and Queens County. The B1 Form showed that the house in Ballynagar was built and listed as a private dwelling. The house roof and walls were made of permanent material. The B2 Form shows that there were a total of 16 farm buildings.
John M.A. Lewis was 47 years old and he lived with his wife Katherine who was 32 years old. John was listed as a magistrate and  Katherine was listed as a magistrate’s wife. They were both born in Co. Dublin. Their 7 year old son John A was listed as a scholar and was also born in Dublin. Henry H Lewis was a brother of the head of the household. He was listed as a land agent and was born in Queen’s County. He was single.   Thomas Glynn was a coachman and he was a 30 year old single man.  Hubert Donohoe was a 32 year old single man who was listed as a shepherd. Lawrence Lyons was a 23 year old agricultural labourer and he was also a single man. Mary Kelly was 26 years old and and she was listed as a parlour maid. She  was not married. Kate Kelly was 24 years old and she was a cook servant. She  was not married. Mary Ann Fahey was a 22 year old kitchen maid servant who was single. All of the Lewis family were members of the Church of Ireland while all the other occupants were Roman Catholic.  All of the residents could read and write. John M A Lewis’ house was listed as a 1st class house with 11 front windows and there were 24 rooms in the house. John owned the land on which his house was situated along with 2 stables, 2 coach houses, 1 harvest room, 2 cow houses, 1 dairy, 1 piggery, 1 fowl house, 1 barn, 1 turf house, 1 potato house, 1 workshop, 1 shed and 1 store.

The N Form shows that there was one inhabited house at the time of the 1911 census with 7 inhabitants.  There were 4 males and 3 females. Five members of the household were Roman Catholics and were were born in County Galway. The head of household was John Lewis. The B1 Form showed that the house in Ballynagar was built and listed as a private dwelling. The house walls and the house roof were made of permanent material. The B2 Form shows that there were a total of 20 farm buildings consisting of 2 stables, 1 coach house, 1 harness room, 2 cow houses, 2 calf houses, 1 dairy, 1 piggery, 1 fowl house, 1 boiling house, 1 barn, 1 turf house, 1 potato house, 1 workshop, 2 sheds, 1 store and 1 laundry.