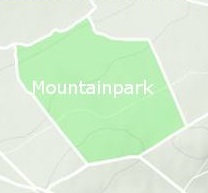 O’Donovan’s field name books (1838) states that the standard name for the townland is Mountainpark and its Irish form is Páirc an tSléibhe. The translation for this townland is given as field, mountain and moor. O’Donovan’s field name books states that there is a reference to Mountainpark in the following documents:
Hyath Clarke, Esq., B.S. Sketch.

John Burke Application Number: C/20 10085
The applicant John Burke with an address Ballyhogan, Kilrickle, Loughrea, Co. Galway applied for the Old Age Pension on 10th November 1920. According to John, his parents were James and Bridget Burke (Harty). He further stated that his address in 1851 was Mountainpark. The application form showed that his application fee of 2/- was not paid thus indicating that he was not successful in obtaining the Old Age Pension at this time.

The Tithe Applotment Books were compiled between 1823 and 1837 in order to determine the amount which occupiers of agricultural holdings over one acre should pay in tithes to the Church of Ireland. The land was measured in Irish acres or plantation acres at the time and this equated to 1.6198 English acres.

There was 1 proprietor in the townland at this time, namely: J. McAylward Esq.

According to the Tithe Applotment Books, J. McAylward Esq held 106 acres of land which was occupied by himself. The following is an account of the tenants’ landholdings, the value of his acres, the amount of composition of the tithe and how this was dispersed among the church hierarchy:

According to Griffith’s Valuation 1855, the townland of Mountainpark contained 171 acres, 1 rood and 7 perches of land therefore, it stated that Jn. Aylward (in chancery) leased 171 acres and 2 roods and 39 perches to the following tennants. James Burke, James O’Brien, Michael Gleeson, Patrick Kelly, Michael Kelly, Michael Murray and Micheal Mulkerrin. The overall rent paid was £15-10-0

There are no census records for this townland.

There are no census records for this townland.