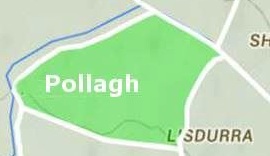 According to O’Donovan’s Field Name Books (1838) the standard name of the townland is Pullagh.  O’Donovan also states that there is a reference to Pullagh in the following documents: B S Sketch and Hyath. Clarke, Esq. and that it was listed as Polloghahy in Inq Tem. Car, 1.

There was no old age pension census search form listed for Pollagh.

There were no records for this townland.

According to Griffith’s Valuation (1855) there was one person with 58 acres of land in Pollagh and it was valued at £28. There was one owner namely Sir J Thos., Bt [Baronet].

There are no records in the 1901 Census for Pollagh.

There are no records in the 1911 Census for Pollagh.