The Old Craft of Making a Hen's Nesting Basket 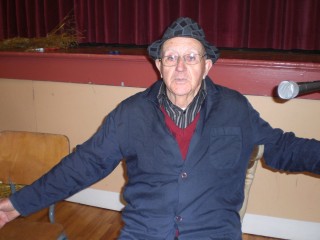 John Michael Larkin is the only person we know of in this area who carries on the skill of making a Síomnóg.

Abbey Heritage Group invited John Michael to share his knowledge and to show us what a Síomnóg is.  He agreed to demonstrate the skill involved in this old craft when he located suitable straw.  Local farmers, Haske and Marion, who run a successful goat farm and produce the famous Killeen Cheese donated suitable straw.

John Michael demonstrated this old craft at a public gathering in Abbey Community Centre on 14 November 2014.  Although 87 years of age at the time, all those present were suitably impressed by the skill and stamina shown by John Michael as he worked away at his craft producing his finished product in one sitting.  Assisted by his son Séan and grandson Jack, it is wonderful to see the interest the family has in this old craft and to know that the craft will be handed down and carried on by future generations.

Subsequently John Michael recorded an interview to explain the background to this craft and this has been incorporated with the video made during the demonstration and an edited version can be seen on YouTube.