You are here: Home>Topics>Manners and Customs

Carrowcrin in the late 1800s

From Memoir of Fr Eugene Nevin 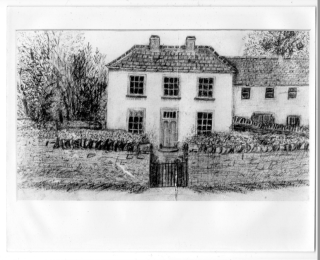 Looking at manners and customs in Carrowcrin in the late 1800s we see that all the necessary commodities were made in the homes of the people and there was little need to import anything.  Hand looms and water mills were constantly working and the hum of the spinning wheel was heard in every country house.  The now very primitive or obsolete quern or hand-mill was part of the domestic furniture, tucked away and covered up in some corner of the kitchen. Though rarely requisitioned then and in emergency only, I have seen it in action and was allowed to my great delight to give it a turn.  The ‘cosgeen’, as it was called, of wheat destined for grinding, would be drying in a pot beside the fire.  This was 1800s Carrowcrin!

The quantity and quality of homespuns produced in every household in Carrowcrin supplied all the requirements for both men and women in wearing materials, which for durability and appearance would be hard to beat. In this regard my mother really excelled, producing not only flannels, blankets etc but her pattern of tweeds was the admiration and the envy of the whole countryside.  To accomplish this entailed strenuous and hard labour, carefulness and no small amount of skill in the working.  Wool taken straight from the sheep’s back had to undergo a series of processing in the course of its journey to the finished yarn.  I always watched with pleasurable interest the process of carding and spinning.  The rolling of the wool between two hand-carders into soft spirals to be deposited in a pile, one on top of the other and within easy reach of the spinner.

Towards the work of turning those woolly rolls into substantial threads for weaving, my mother used to have the assistance of an old woman names Molly Cotham.  I say old because to me she then seemed so, but she must not have been, for living in Bracklagh and traveling that distance morning and evening would have been rather much for an old person.  Then too in the course of her day’s work, she would have to walk many miles moving backwards and forwards beside the spinning wheel, with her right hand setting the wheel a-going, with the left drawing out the thread on the spindle.

These were great times in ‘the Barony’.  The neighboring women would come in for a ‘cup o’ tay’ and a talk in Irish, generally, which I hated at the time – not knowing what they talked about – which was their reason for talking in Irish.

Next myself and an ass were commissioned or commandeered to take the bales of thread to a special weaver in Knockash.  How often we trudged together that long, dreary bleak road!  Knockash at that time was an Irish-speaking enclave with just enough knowledge of English to transact business but by now they are I suppose as English there as Piccadilly.  I was told there were ‘Ultachs’ living in a cottage on the brow of the mountain overlooking Knockash and I used to peer over the fence to see what they looked like, having no idea as what ‘Ultach’ meant.  I know now that they were poor Catholics driven from the North by their Orange persecutors; an echo from Cromwell’s ‘to hell or Connaught’.  God bless and prosper them.  I hope there are some of their descendants there still.

It would be interesting to know what kind of dye my mother used in preparing the wool and the thread for the weaving, for it was very fast, never fading or running.  Logwood was certainly used as a groundwork.  If I remember rightly, there was an alder tree, the leaves of which in combination with stuff from the bogs called madder, was very effective.  But I may be mistaken in all this….

Men’s wear of the period 1854, and for some years after, was a becoming apparel – distinctive and picturesque, in contrast to the drab dead level of present-day conventionality.  It survives now and in part only at Court functions and stage representations where it is often caricatured.  It consisted in a combination of two kinds, namely, the small clothes and the body coat.  Small clothes are breeches reaching to the knees, with garters or leggings, or stockings; body coat or, as it used to be called, ‘cut-away’ coat – cut away level with the vest, with long tails behind.  Then the coat would have a generous collar, with two rows of large buttons of white metal, generally on the facings.  The outfit was completed with a tall hat, sometimes silk, more often not, and then when not up to the full standard height, was known as the ‘Caroline’.  The tall hat would be used occasionally as receptacle for the handkerchief, and I have seen old men take out their red bandanas from it, use them and replace them in its deep depths.  The apparel, in all its equipment, was really very becoming and my grandfather, Frank McDonagh, portly and tall dressed out in his best Sunday clothes, was a pleasing sight – a picture.

Women’s dress – well, it was the Victorian age, with all its spaciousness, and they have been fully described and not infrequently laughed at, for their dowdiness and the wasteful amplitude of material. The fashion of the crinoline or hoops was then declining and in a few years completely disappeared, but I have seen it in action – a funny and awkward contrivance certainly.  That my mother had a dress of the kind I know, because remnants of the last hoops in steel ribands and whalebone were strewn around, which we boys used as playthings.

There is no need to institute a comparison between the ladies’ dresses and men’s wear of today, 1955, and those of that far past age I am now recalling.  The difference is a contrast and a very marked one, but then customs, manners and consumes have changed the world over and are likely to continue changing to the end of time.

In accordance with the general usage of the time, the girl after marriage continued to be known by her maiden name and was rarely, if ever, addressed by her proper title of Mrs; indeed her husband would hardly know who was spoken of if his own name with Mrs was used!…

It has been said that history is forever repeating itself; reproducing characters and events of the past, under different names, in altered circumstances, but intrinsically the same as those which have already figured prominently on her pages.  And Solomon, wisest of men, inspired of God, wrote: There is nothing new under the sun.  Neither is any man able to say, ‘Behold, this is new! for it hath already gone before in the ages that were before us’.