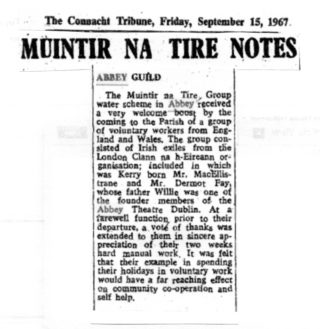 The Muintir na Tire Group water scheme in Abbey received a very welcome boost by the coming to the Parish of a group of voluntary workers from England and Wales.

The group consisted of Irish exiles from the London Clann na h-Éireann organisation; included in which was Kerry born Mr. MacEllistrane and Mr. Dermot Fay, whose father Willie was one of the founder members of the Abbey Theatre Dublin,

At a farewell function prior to their departure, a vote of thanks was extended to them in sincere appreciation of their two weeks hard manual work.  It was felt that their example in spending their holidays in voluntary work would have a far reaching effect on community co-operation and self help.