You are here: Home>People>Brief History of Abbey Post Office 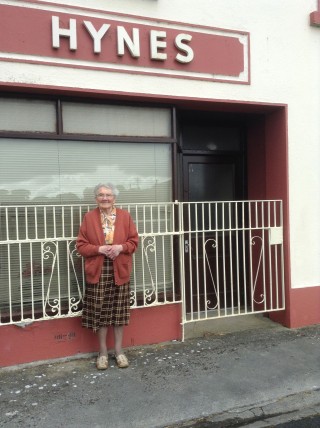 Mrs Nora Hynes outside the closed Post Office in Abbey

Abbey Post Office dates back to 1831 when Mr J Hynes, almost certainly Jack Hynes, my great great granduncle, was appointed Postmaster.  We know the Post Office existed in Abbey at this time from a number of references to it during Postmasters’ meetings.  The minutes of these meetings are now stored in the Royal Mailing House in London.

On 16 November 1874 Jack’s daughter Janie Hynes, later Janie Dervan, took over the running of the Post Office at an annual salary of £12.19.0.  She provided an excellent service to the village of Abbey and surrounding areas until she retired.  Then in 1938 the Post Office was taken over by her nephew, my granddad, Edmund Hynes who continued to run the Post Office and provide the same postal service in the locality in addition to working on his family’s farm. Some years later Edmund met a lady who was working in the Post Office in Woodford and so my grandmother Nora who had trained and worked in Post Offices in Moneygall, Ballycalla, Emily and Woodford came to live and work in Abbey when she married Edmund Hynes in 1952.  Edmund and Nora continued to run the Post Office, shop and farm until Edmund’s death in 1983 RIP.

Nora’s memories of the Post Office illustrate how busy she was trying to run the business, rear four children and also help out on the family farm.  Christmas was a particularly busy time with the posting of turkeys and geese to relatives abroad.  Only a few houses in the parish had telephones so telegrams were used to send brief, important and often sad news to family members.  Nora herself or one of her children would have to travel on their bicycles to deliver these telegrams to houses when the Post Office closed in the evening.  The cheapest telegram containing 12 words was £1.10.0.  An example of a telegram message might be ‘Uncle Jim died suddenly yesterday.  Funeral arrangements later. Donal’.

Nora Hynes has lovely memories of the kindness people showed her in the parish when she delivered a telegram, by offering her tea and cake and maybe a half crown! ie two shillings and six pence, the equivalent of 16 cent today.  Another memory is of the work involved in running the telephone switchboard.  For those in the parish who had phones, the manual switchboard exchange was a telephone link to friends, family and the business world beyond Abbey.  When Nora first came to Abbey, only four people, known as subscribers, had phones.  When the switchboard exchange went automatic in 1986 there were sixty-five subscribers.  It is difficult to imagine today when even children have mobile phones that in the mid 1980s only sixty-five people in the entire parish of Abbey had a phone.  The switchboard was turned on at 8 am and did not close off until 10 pm.  Subscribers could not make a call until the switchboard was turned on in the Post Office.  On Sundays, phone service was available from 9 am to 10.30 am and from 7 pm to 9 pm.  So even if the Hynes family wanted to go away for a drive on a Sunday they had to be back to switch on the service at 7 pm.  Also every call had to be recorded on a hand written telephone ticket.

Nora Hynes retired on 17 January 2003 and on her retirement the Post Office was closed as part of the Government’s decision to close all small rural Post Offices.  This ended the Hynes family running Abbey village Post Office for 172 years.  The village now offers a Post Point service in the local shop with a limited number of services.

On her retirement the people of the parish gave Mrs Nora Hynes a farewell party in Abbey Community Centre as a token of their gratitude for all her kindness to them over many years.  Her final memory of those days is that of the friendship and chat she always enjoyed with the neighbors coming in, especially on Old Age Pension day on Fridays and Children’s Allowance day – the first Tuesday in every month.  Every year more and more Post Offices are closing in the countryside which my grandmother says is a pity as the Post Office was always a great link for people to meet each week and exchange banter and news.

It is a coincidence that both my grandmothers were Postmistresses – each ran a small rural Post Office in both Abbey, Co Galway and in Ardagh, Co Longford.  I have enjoyed hearing their stories over the years as they have lots to reminisce about each time they meet as their working lives were very similar. I am glad that both Nora Hynes, now in her 92nd year and Peggy Keegan, now in her 97th year, have enjoyed many years of happy retirement and please God they will continue to do so.