You are here: Home>People>Request for Further Information

Editor’s Note: As a follow-up to his previous article: Researching our Family Tree we are happy to publish the following Essay from Hugh Donohoe who hopes to add further to the information already gathered.

This is the second of what I hope to be a limited series of essays on the descendants of my great, great grandfather John Donohoe who is estimated to have been born in east Galway in the year 1790.

He married Anne, my great, great grandmother whose maiden name is unknown. Their son Thomas is their only known child, although I suspect they had more.

It is not from a lack of endeavour that there has been little progress but more a lack of records and documentation for the era. Therefore, I turned my attention to what should be a more fruitful project. Hopefully, I will return to John and Anne at a later date.

In my previous essay, I suggested that the children of Thomas and his wife Bridget (nee Lyons), my great grandparents, would be a worthy topic for research. My outreach did as I had hoped it would and achieved some very positive results. I have set out below my most up-to-date knowledge of their lives and that of their off-spring.

Thomas and Bridget had twelve children all of whom were born in or around the Woodford, Loughrea, Portumna triangle centred on Abbey and in particular the townland of Coolfin. Identified by the ancient castle of the same name which dominates the townscape. As would be expected, some stayed locally within the triangle, where they raised their families, who in turn also remained local. The majority though, set their sights further afield; whether this was due to necessity or choice remains yet unanswered, but I strongly suspect the former. Those that relocated to the USA, settled close to one another, a common feature of migrants. Their chosen location was either Boston or New York. Their death registrations suggest that they did not venture far during their lifetime spent in the USA.

I find that by portraying individual family members on a bare ancestral tree is a barren endeavour because it does not personalise their life story. This is why I chose to start this discourse in order to put some leaves on the tree, or even fruit. To labour the analogy further, hopefully some new seedlings may sprout and give some life to our dead ancestors.

Previously I asserted that Bridget Lyons was attributed with the non de plumes of Bedilia, Bridgita and Delia. To add to the confusion, the latest tranche of information that I have received states that she was also known by the name of Ellen. This poses more questions yet to be addressed and adds further to the enigma that is Bridget.

The opinions here are not set in stone, they are the consensus of other participants. It is my interpretation of their hard work, in providing the necessary documentation from the available resources. I welcome corrections and alternative opinions in order to further our quest.

Five of Thomas and Bridget’s children stayed in Ireland, seven of their children relocated to the USA. My focus in this essay, is on the five children that stayed in Ireland. This is because those that relocated to the USA are very well documented, far more so than those who remained. Of the five that stayed “home”, four were female, and one was male. Listed in order of age, respectively: Bridget – Maria – Anne – Teresa – Thomas

Thomas and Bridget had twelve children. Ten were born in Coolfin and two were born in the Woodford environs. The association with Woodford may suggest that this is the hometown of Bridget Lyons’ family, an avenue yet to be explored.

As might be expected, I have varying degrees of knowledge regarding my grandparents, aunts, uncles and cousins. Some of whom I was acquainted with on my visits to Ireland over the years, and others on their visits to England during their travels. My long-term expectation is to fill in the missing pieces in what I perceive to be an extremely complex jigsaw puzzle. Listed below is the most up-to-date knowledge that I am in possession of:

BRIDGET Donohoe, born 25 January 1860 in Woodford. She married Michael Murray at the age of 21 years in Kilnalahan, Abbey, Loughrea. Michael was 21 years of age at the time of their marriage in 1881, witnessed by John Murray and Anne Donohoe. It is estimated he was born c.1861 in Ballygowan, Galway. His father was also named Michael. Bridget and Michael had six children all of whom were born in Ballygowan. A conflicting source states that Bridget was born in Coolfin. If they were married in Kilnalahan, it would have been in the chapel designated for worship in the derelict former monastery; this being prior to the Abbey Church construction in the late 19th century.

Michael Murray is mentioned as an evictee in the lyrics of a popular protest song of the period. The song “Sweet Ballygowan” depicts the Ballygowan evictions of 1888. Being contemporaneous with the above, I feel this is an important area for research.

** John (Jack) was cited as the resident farmer at Carraroe House, Ballinakill in 1939. His age and location would make him a prospective candidate for position number 5.

MARIA was born in Coolfin on the 27 January 1864. She was married at the age of 22 to Joseph Fahy in 1886. Joseph was 28 years of age at the time. Joseph was born c.1858 in county Galway. Maria and Joseph had 12 children, all of whom were born in Galway, probably Tynagh or nearby. 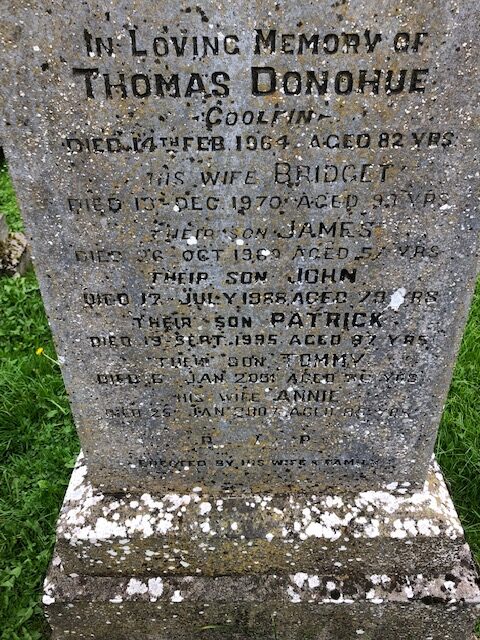 More is known about child number eight, Peter. It is notable that he was the only known sibling to venture beyond Ireland. He was married at the age of 40 to Elizabeth Meaney in New York, on 30th April 1939. She was 39 years of age at the time. They had four children: one son and three daughters. Elizabeth was born in September 1900 in Ireland. Peter died in New York on 21 June 1982 at the age of 83.

ANNE was born in Coolfin in 1866. She was married at 17 years of age to John McDonnell who was 25 years of age at the time, on 06 February 1883 in Abbey. John was born about 1850 and died on 16 April 1932 in Reaghan, Duniry, his father was also named John. Anne died at the age of 56 on the 22 September 1922. Anne and John had 9 children: all male who were born in Reaghan, Galway. William sadly died at five months of age, the cause of his death is unknown. Likewise, the cause of Peter’s premature death is unknown.

John was the only known sibling to emigrate to the USA. He married Catherine F Casey. She was born about 1866 in Ireland. They had two children, Katherine Francis was born in 1924, she died in 1997. Mary Madeline was born in 1926. Both children were born in Worcester, Massachusetts, USA.

TERESA was born on the 10th May 1872 in Rosdurra, Woodford. She was resident in Coolfin in 1901 (she was not there in 1911). She was 29 years of age and unmarried at this time. She married THOMAS CORRIGAN and they had two children, a boy and a girl. There are conflicting reports on her birthplace and her given age, which might suggest an incorrect identification.  Further research is required.

THOMAS was their youngest child, my grandfather and was born on 20 March 1882 in Coolfin, one month before the death of his father Thomas. In 1905, at the age of 23 he married BRIDGET POWER who was born in Cloggernagh in 1878. There is confusing and contradictory reports on both Thomas and Bridget’s residential location at the time of their marriage. They had 9 children, the first being my father, Michael. They were all born in Coolfin, except Michael who was born in the Power family home of Patrick and Mary (nee Burke) in Cloggernagh, Portumna. Thomas died aged 82 in 1964. Bridget died aged 93 in 1970. There is something of an anomaly with my grandfather ending his surname in ‘HUE’. My father, according to his birth certificate and his usage ended his surname with ‘HOE’. The reason for this is unknown.

Many of the above are memorialised in the Donohue family tomb in Abbey Cemetery.

As can be seen from the many inconsistencies and unknowns, there is scope for further investigations, which I am sure will reveal a more comprehensive study by those willing to take up the challenge.

No census was taken in 1921, because of the War of Independence. The first census of the population of the Irish Free State was taken in 1926. These records are not currently expected to be released to the public until 2027. For those who relocated to the USA, theirs is also a worthy field of research best undertaken by their descendants in the USA who are in a better position to do so. They are: Ellen, Eliza, Margaret, John, Agnes, Patrick and Joseph. There is of course another chapter to be written, that is, what became of those who emigrated to the “Townlands” of Bootle, Balsall Heath and Cricklewood? But that’s for another day and another essay.

With all historical research hard ‘facts’ are difficult to come by therefore it is subject to speculation and interpretation. If anything is incorrect or misquoted I apologise in advance and welcome your advice and or correction. Any new or better information will be entered in an addendum in due course. As with my previous essay I have not included referencing. This being in order to avoid any preconceived bias and to encourage independent research.