Not so very long ago, the homes of Ireland had as a regular feature the session or Céili of native music, song and dance.  On one night each week the table and chairs were moved into one corner of the kitchen and the neighbours gathered in for their recreational break.  It was a time of merriment and fun. The piper brought the uilleann pipes, the fiddler his fiddle; there was the tin whistle, the concert flute and the accordion all providing music for the eager dancers.

Times haven’t really changed; the native music, song and dance of Ireland are still very much alive.  In addition to the fine old traditional musicians, the country can boast of thousands of promising young exponents of the native arts.  Yes, the kitchen dancers may not be as plentiful but then there are the festivals of traditional music, Fleadh Cheoil and Fleadh Nua at which the musicians, singers and dancers come together to enjoy themselves as their forefathers did in years gone by.  And of course, there is the local ‘Seisiún’ which for many years has been the main local activity of Comhaltas Ceolteoirí Éireann.

‘Seisiún’ is a further development of this session and in may ways resembles he old house Céili.  The neighbours will again gather in for their recreational break.  The setting will be different and approach more novel and attractive but the same friendliness and involvement will be obvious.

‘Seisiún’ is a colourful cabaret of Irish traditional music, song and dance presented by Comhaltas Ceolteoirí Éireann with the co-operation of Bord Fáilte.  Six ‘Seisiún’ groups have been established throughout Ireland performing in hotels throughout the country during the months of July, August and September.  The Galway group is drawn mainly from the Ballinakill and Galway city areas.  No fewer than seven of those are either the children or grandchildren of the internationally famous ‘Old’ Ballinakill band, which delighted millions with their repertoire of jigs, reels and hornpipes during the late thirties and early forties and also had the distinction of being the first céili band to broadcast from Radio Éireann then known a 2RN on November 1st 1929.

Of the founder members only one now remains, Miss Anna Rafferty, Rathgar, Dublin.  The traditions of the ‘Old’ Band are truly being recognised and evidence of this is shown in the number of ‘Ballinakill’ tunes included in the present ‘Seisiún’.

The Galway based members, Sean Gavin and Martin O’Connor are no strangers to the traditional scene.  They have broadcast from Radio Éireann and Radio na Gaeltachta and have featured on ‘Ag Déanamh Ceoil’ and ‘Provincials ’72’ from RTE.

The artists from Ballinakill, household names as far as traditional music, song and dance is concerned, have also contributed to Radio na Gaeltachta, Radio Éireann and have appeared in Comhaltas Ceolteoirí Éireann sponsored shows from RTE like ‘Ag Déanamh Ceoil’, ‘Provincials ’72’, ‘Bring down the Lamp’ and ‘Country Airs’ etc.  They are Aggie and Bridie Whyte (sisters), now Mrs Ryan and Mrs Fahy, Kathleen Ryan, Maureen Ryan, Máirín Fahy, Gerard Fahy, Eddie Moloney also from Ballinakill but now living in Galway and Seamus Ó Riain, who has compared concerts up and down the county, is a traditional singer and very capable fear a’ tí.

The groups were guests at the All-Ireland Fleadh Cheoil at Listowel last weekend.  ‘Seisiún’ is produced by Martin Fahy NT and is held in three Galway hotels each week, two of them in the city and one in the country. 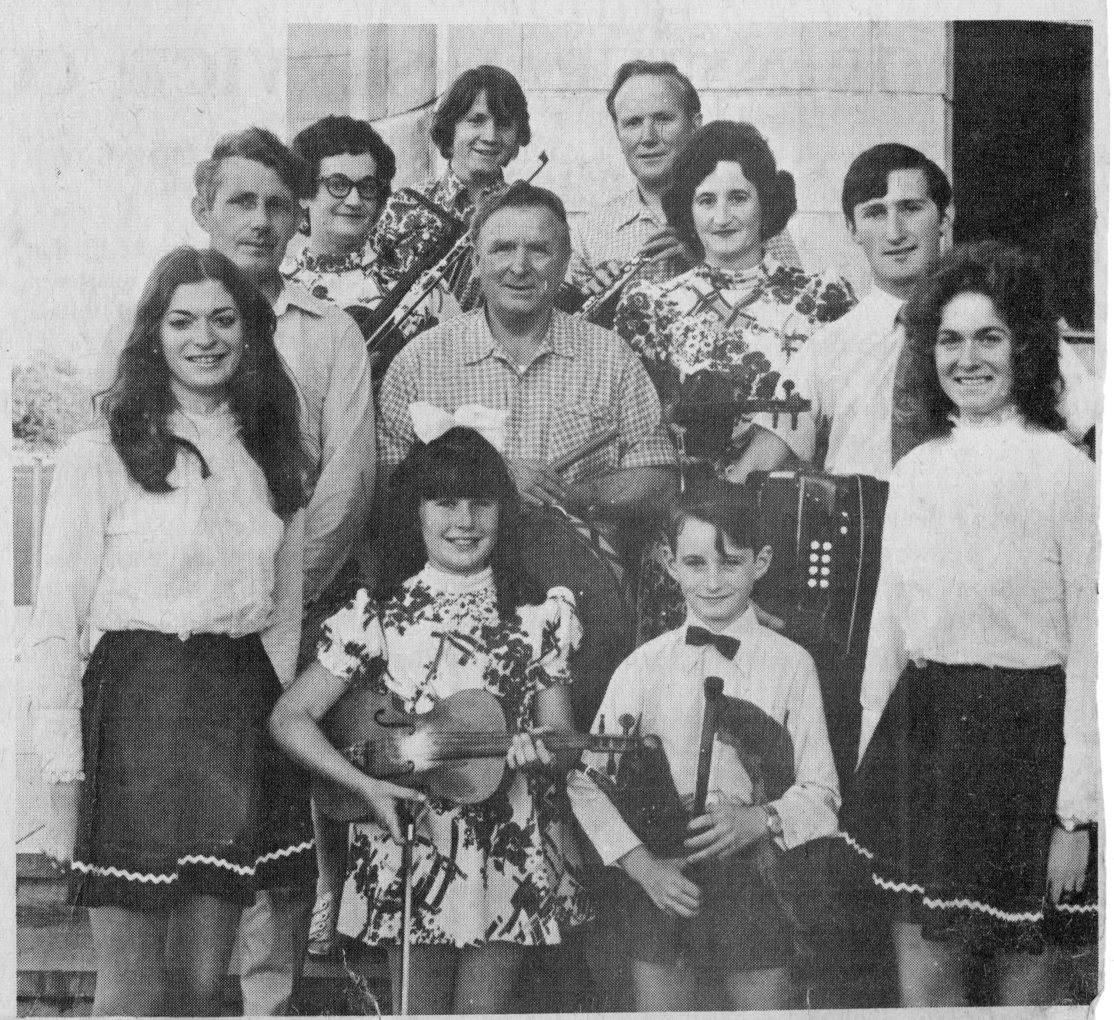