Parish Priest in Killimor, Co Galway at the time of his death 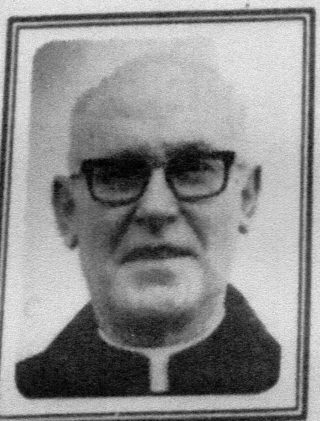 Fr Pat Abberton giving a blessing to his mother, Maria Abberton, on the occasion of his ordination.
Courtesy: Paula Abberton

He studied for the priesthood in Maynooth and St Peter’s College, Wexford and was ordained priest for the Diocese of Clonfert in St Brendan’s Cathedral, Loughrea in 1942.

Fr Abberton served as chaplain to Portiuncula Hospital, Ballinasloe and St Joseph’s College, Ballinasloe. He was appointed as Curate in Kilrickle prior to his appointment as Parish Priest in Killimor where he served until his untimely death in 1978.

His family and extended family members remember Fr Pat as being a central figure in the family, just as the church was the focal point in his parish.  Nothing happened in the family without reference to him and what he represented.

As a priest, he had a continuous eye on the things of the next world and gently brought others in that direction, by example and involvement.

Always in good humour, he reached out and made himself available, wherever needed.

At the time of his death, his bishop Dr. Cassidy, spoke of him as “a man who had transported half of his parishioners to hospital and had brought the other half to visit them”.

Fr Pat had contracted tuberculosis in his early twenties and spent most of his working life with one collapsed lung.