You are here: Home>Topics>Bygone Days

There were visitors always.  It was customary for a passer-by to call in, unheralded, at any time.  A man would call to light his pipe, while on one knee, or to get a drink of water from the white enamel bucket.  Stranger or resident would all drink from the same mug; no bugs on mugs!  News was also shared.  The woman, Bridget Slattery, known to us as Bridgie, going to collect ‘glórán’, at ‘the horses drink’, to feed the growing suck-bonhams or piglets would call and show her swollen arthritic hands in hope of easing the pain; ‘a problem shared was a problem halved’ and this sharing was better than an application of the carefully preserved, cure-all, goose-grease.  How I relished the boxty she made and nobody else knew how to make it.  The man who had a hangover on Monday and couldn’t complete the day at work sometimes hid his bicycle at the end of the house and slept the hours away until it was the right time to go home having paid a second time for his weekend indulgences.  The woman who came and wrote the important letters to faraway family members had the inside track and shared all confidences. Night visitors shortened the winter nights by telling of their experiences and contributing to any family ventures.  Rob loved to sing, once started; tuning-up was by way of partial refusal in order to create the right atmosphere.  He was very good and was only threatened in quality by his workman baritone.  His was Albert Hall style coming from stage experience, as he held a rolled newspaper, conferring like, in his hands.  We clapped and shouted ‘powerful’.

An occasional visit from Johnny, at the end of the forties, brought us to new horizons in communication technology.  A man with a home-made wireless! all done from a diagram in a book, with coils of light wire and more wire, a magnet, a safety pin and a headphone.  We could find ‘Athlone’ even if at times faint.  The fainter the better; something we again experienced when we got the battery radios.  When a battery was low or wearing out and volume fading, the expression ‘glued to the radio’ was small exaggeration.  Hearing was believing as we were kindly and willingly dragged into the new magical world of sound radio.  Thank you Johnny.  There was always tea for regular or casual visitor even during the war-rationing. These simple visitors are just a few of those, now ‘clothed in white’, paradoxically, on permanent ‘cuairt’ to the eternal visitors’ centre.

Having a wireless or radio was essential for the matches on Sundays and for the daily news. We were one of the first to have a radio and had many visitors on the day of a match. Programmes were broadcast for about five hours each day and reception was poor for overseas channels. Up-to-date news added to the topics of conversation, when people sat around the fire at night, and singers learned new songs by listening to sponsored programmes and ‘hospital requests’. Dancing on the cement, kitchen floor was done to music from a gramophone and many could hum or jig a tune or play through a comb.  A long ballad held special status, perhaps because of the entwined story, or maybe, the feeling with which it was delivered.  Nearly all the men would whistle tunes as they worked, something not suitable, nowadays, in crowded workplaces.  Maybe, people were happier.  We each had our own party songs; mine were: ‘I wish I had a Kerry cow’ and ‘I’ve been a moonshiner’.  One winter, we  ordered a hundred single-sheet ballads and songs from Waltons, Dublin, whose advertising motto was ‘if you sing do sing an Irish song’.  We followed this headline until the Radio Luxemburg signal could be picked up and we were introduced to various ‘top tens’ of other cultures.  Marie was a good singer and even learned piano music at one of the two houses in the parish that owned a piano.

At Christmas time, there were many house parties and sing-songs, boosted by the presence of holidaymakers from England, Dublin or college.  As older schoolboys, we had the audacity to go from house to house, dressed up as wren boys or mummers on St Stephen’s Day and ‘play’ music and dance, and thus collect money.  As there was little else happening, during that day, people were delighted to see us and many hosted us with tea, lemonade and Christmas cake.  I had a similar Christmas welcome a few years later, when I acted as temporary, assistant postman on the same route.  A single Christmas card delivery, to a house at the end of a long boreen with two gates, on a wet day, was well-earned money.  Evening dog-calming classes would have been welcome to meet the daily canine challenge.  After Christmas, a mummer dance was held from the wren boy takings.  This was by invitation and did, sometimes, lead to bad feeling, when there were important omissions; so much so, that after two years of dances it was decided to buy a football instead, the following year.

Soon, a new, wider world opened for the local dancers when a very large ballroom, The Waldorf, opened three miles away, in Woodford.  It was uphill all the way to Woodford but most of the parish bikes were well up to it and after the night’s dancing it was downhill, home.  When my uncle Martin got a car, he would be hired for a couple of visits to the ballroom each Sunday night. He had one unusual hiring: a man, living on the side of Sliabh Aughty, used to take his wife on a wheelbarrow out to the main road to be collected and taken to the Waldorf.  He would again be at the collection point on return and ferry the lady home along the narrow muddy boreen.

The senior boys in our school served as altar boys with those living near the church, serving Mass on weekdays as well as Sundays.  We were given a treat of a day’s outing when cars became available after the war.  One curate did his home visitation and sick calls on horseback.  His successor had a car, but due to his poor eyesight he took an altar boy with him if travelling to the neighbouring parish on occasional Sundays. The altar boy had to give early warning of advancing traps, sidecars, bicycles and bad bends.  Other duties required serving at Benediction or travelling to station Masses throughout the parish.  This was a time when everybody went to Sunday Mass and there was little or no work on that day.  A horse would not be tackled for work on a Sunday, Church Holyday or on Good Friday, and a field of hay or corn would not be touched, however bad the weather.  Some farmers would start a new job or project, only on a Friday.  Marriages took place, almost exclusively, on Wednesdays and there were no marriages in the Lenten season.  The prescribed Lenten fast was strict and Friday abstinence from meat was universal.  Fish was hard to get in our inland locality so every Friday we ate potatoes, onions and butter, with plenty of newly-churned buttermilk.  Some men liked to go hunting rabbits or hares on Sundays.  A hare would lead dogs and men from field to field, and farm to farm, with no hope of catching him with ordinary dogs, but rabbits were caught and they provided a welcome soup and meat during the week.  The ‘hull a hull’ cry that went up on ‘starting’ a rabbit, confused the rabbit and made easy work for the dogs.  Ferreting rabbits was a lucrative, winter pastime, during and after the war.  Up to twenty could be caught in a day and this augmented by five or more from the night’s snaring, made a handsome income.  A schoolboy would be happy with one or two rabbits from a night’s snaring.  Sometimes an unwelcome fox or badger would be caught.  We also tried rod fishing; my catches were few, but my brother, Pat could coax them from the water.

There was a sports meeting in most parishes in summertime: sprints, long distance, sack races, cycling, long and high jump, weight throwing, sheaf throwing and a special highlight of tug-o-war, when the strong men of the parish took on a neighbouring team.  A dancing board would be borrowed from Leitrim parish, the previous week, and firmly set up in a corner of the sports field, and it was here, that many had their first proper dance.  As a ban on foreign dances was in operation the dances were céili and old-time waltzes.  Music was provided on button accordion, the sound of which travelled well.  No electricity meant no sound systems.  There was little training for athletics but any serious contender was advised to eat plenty of raw eggs. Running downhill was recommended for increasing speed. 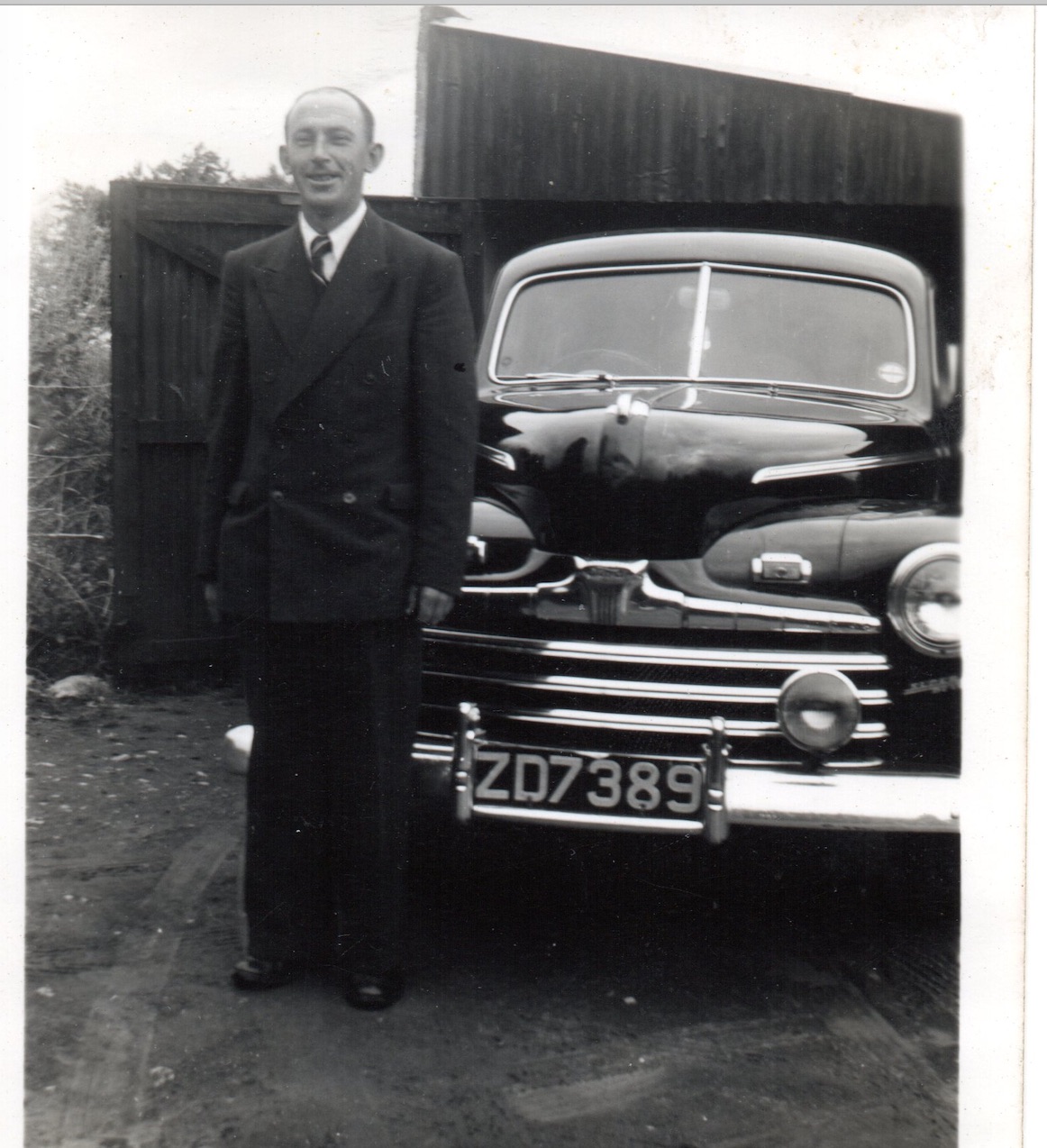 My uncle, Martin, bought a car for hackney work in 1950.  Cars were very scarce then and it was a real treat to be taken on a journey.  A trip to Knock Shrine was an early highlight.  Even if we did not know the full detail of the Apparition at the time, it was wonderful to see thousands at prayer, often kneeling on the hard flagstones, and to see many crutches, hanging and placed at the apparition wall.  Contracts for hackney cars gradually grew, particularly at weekends, when the local Abbey Céili Band required regular transport.  Soon, Martin switched from his original Hillman Minx to a more spacious Ford V 8, to cater for bigger loads and longer journeys.