You are here: Home>Topics>My Introduction To Hurling

My Introduction To Hurling

Often played on the Roadway!

Getting a hurley was difficult; the first one I had, was a half-hurley, broken and discarded by an adult.  Later, Mick Slattery, the kind man in the labourer’s cottage, made one for me out of a young ash tree.  Busy people always had time to oblige a child; the hurley was produced in record time with appropriate hoop and black tape.  Croke Park beckoned.  We all became more selective in our choice of hurley as we got older: the size of the boss was important, the direction and width of the grain, the overall weight, the thickness at the heel, the grip at the top and of course, the spring.  The quality of the spring was the ultimate test for suitability. The spring could be improved by burying the hurley in the heap of farmyard manure for up to four weeks.  With all this knowledge, the better hurlers would cycle to a fulltime hurley maker and buy hurleys for themselves and close friends.  Desirable qualities had sometimes to yield to price.  Money talked loudly.  Most of the boys in my school thought that they would eventually be wearing county colours particularly if they could strike the ball on both sides.  Indeed, our best hurler always hit the ball on the left side and nobody could stop him. My sight got worse; what a reality check and a lessening of aspirations for gold!.  If only!  But we hurled on and Sunday afternoon was completely given over.  Sunday lunch or dinner often got in the way of the more important business.  We decided what field we would use, usually a field of one of our parents if it satisfied our growing demand for more level ground and smoother surface.  One could not play proper hurling where there were deep cuttings from horse or cattle hooves!  However, we settled for hurling on the road on weekday evenings; this was usually on the main road in the village itself. 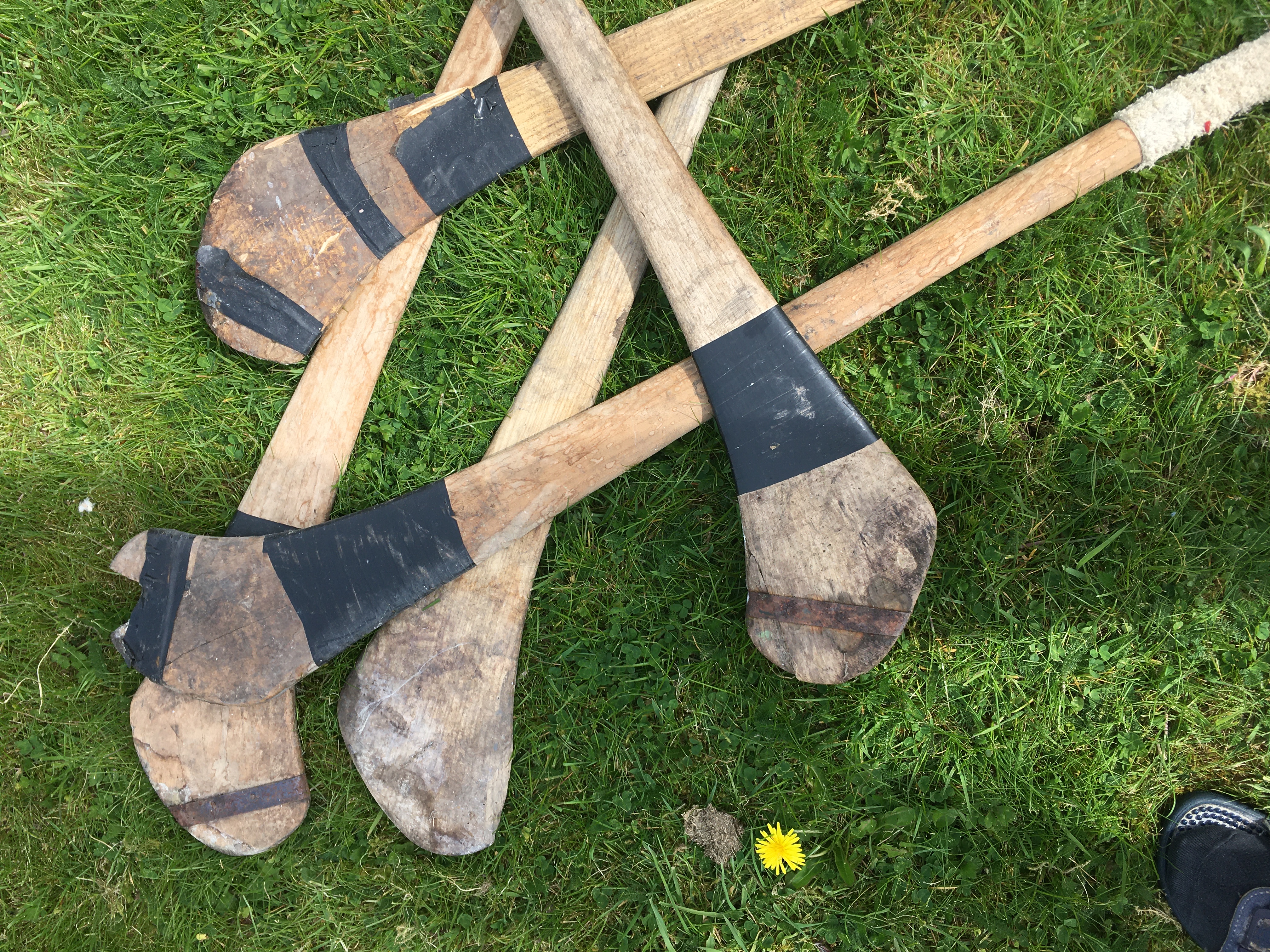 We also knew of the dangers of the game; we saw the Monday morning sticking plaster, when it covered the cuts or stitches of members of a heroic junior team that had given their all in the previous day’s effort to bring glory to the small village.  For two weeks I saw my uncle bathe a deep wound on his shin.   Another time, he spent the Monday cutting turf after a leg injury on Sunday and had to remain in bed for the following eight days.  If you couldn’t work, rest in bed was the cure.  Few visited a doctor for anything and if a doctor’s car was seen at a house it indicated death or its onset.  For hurling, we didn’t have appropriate jerseys, togs, boots or socks.  In fact it was hard for the junior team to always find their fifteen jerseys.  On a fine day in early summer of 1945 at the end of a very harsh spring, a supporter was seen to be wearing a green and white team-jersey as a vest and had worn it for the winter.  Members of teams, like everybody else, cycled to matches.  A lucky few went in traps or sidecars.  I had one such trip in a sidecar.  Losing a match might not be the only loss of the day: money, cigarettes, pipes, lighters, clips for trouser legs, or even items of clothing could go missing from the togging out area, which was often situated under a whitethorn fence, under trees or in a cattle shed.  A moment of intense excitement on the pitch or the outbreak of a fight would distract the caretaker from his duties and perhaps entice the only kleptomaniac at the match to take advantage.  Matches without fights were often regarded as second-rate as this indicated a lack of commitment or at worst a certain cowardice.  Many supporters were happy to see hurleys locked in mid-air and all caps and berries taken or knocked off.   A tweed peaked cap was worn by most men on or off the field.  Some matches couldn’t be finished, they seemed to take on a life of their own with unpredictable outcomes and final scores were sometimes settled later, downtown.  It was nearly impossible to keep the spectators off the pitch, as the side line was marked with just a few flags or a white line, painted from lime and water.  A man would run up and down the line trying to be opposite the position of play and shouting ‘back to the line’, ‘keep the line’.  When the play moved to the farther end, spectators would lean in to get a better view.

The regulation about substitution was amusing.  The player coming off had to be ‘injured’ so, most of the time he would feign injury.  If a player was playing badly, shouts of ‘lie down’ would be heard among supporters and, if the management, usually one man, thought it appropriate, he would give a signal to him to lie down and the unlucky player would limp off.  Perhaps it was less embarrassing to come off ‘injured’!  Most players knew when their time was up or when they were underperforming.  There seemed to be always a shortage of substitutes and some supporters could get a sudden call to pull their socks over their trousers and join the fray.  Getting a field ready for a match was a maze of mini tasks.  Goalposts had to be cut and fixed in position and a crossbar had to be secured at both ends, all being done without the help of measuring tape or a spirit-level.  Perfection or imagined perfection was achieved by looking along an imaginary line with one eye closed.  Lining a pitch required lime and a brush with the required distances being verified by long steps.  A wheelbarrow and shovel got rid of the dung.  Irregular hoofmarks were stamped out by the heaviest men and everything would be ready an hour before official starting time or two hours before actual start.  Absence of nets for the goals led to many contradictory outbursts.  A crooked goalpost would even deceive Hawkeye.