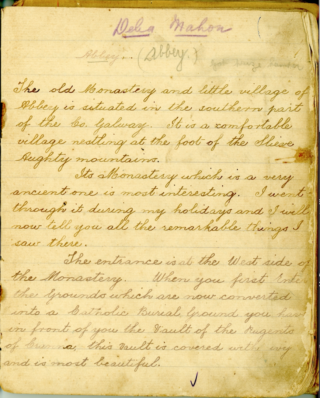 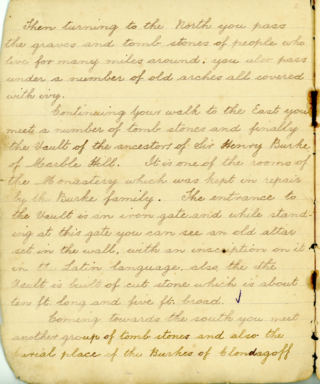 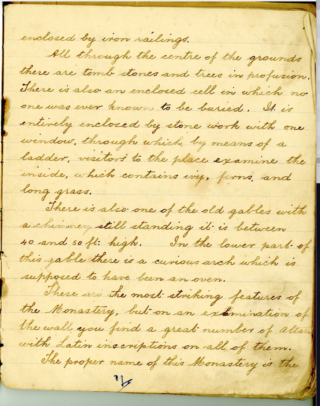 The old Monastery and little village of Abbey is situated in the southern part of the Co Galway.  It is a comfortable village nestling at the foot of the Slieve Aughty mountains.

Its Monastery which is a very ancient one is most interesting.  I went through it during my holidays and I will now tell you all the remarkable things I saw there.

The entrance is at the West side of the Monastery.  When you first enter the grounds which are now converted into a Catholic Burial Ground you have in front of you the Vault of the Nugents of Cranna, this vault is covered with ivy and is most beautiful.

Then turning to the North you pass the graves and tomb stones of people who live for many miles around, you also pass under a number of old arches all covered with ivy.

Continuing your walk to the East you meet a number of tomb stones and finally the Vault of the ancestors of Sir Henry Burke of Marble Hill.  It is one of the rooms of the Monastery which was kept in repair by the Burke family.  The entrance to the Vault is an iron gate and while standing at this gate you can see an old altar set in the wall, with an inscription on it in the Latin language, also the Vault is built of cut stone which is about ten ft long and five ft broad.

Coming towards the south you meet another group of tomb stones and also the burial place of the Burkes of Clondagoff enclosed by iron railings.

All through the centre of the grounds there are tomb stones and trees in profusion.  There is also an enclosed cell in which no-one was ever known to be buried.  It is entirely enclosed by stone work with one window through which by means of a ladder, visitors to the place examine the inside which contains ivy, ferns and long grass.

There is also one of the old gables with a chimney still standing, it is between 40 and 50 ft high.  In the lower part of this gable there is a curious arch which is supposed to have been an oven.

These were the most striking features of the Monastery, but on an examination of the wall you find a great number of altars with Latin inscriptions on all of them.

The proper name of this Monastery is the Abbey of Kilnalahan and from this the village has taken its name.