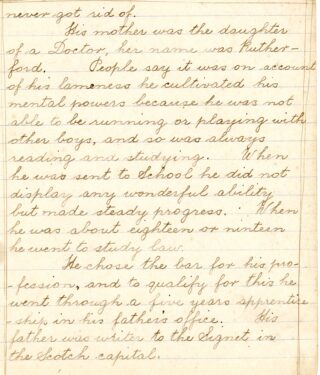 Sir Walter Scott was born in Edinburgh, the capital of Scotland.  When young he was very delicate, he had also a lameness which he never got rid of.

His mother was the daughter of a Doctor, her name was Rutherford.  People say it was on account of his lameness he cultivated his mental powers because he was not able to be running or playing with other boys and so was always reading and studying.  When he was sent to school he did not display any wonderful ability but made steady progress.  When he was about eighteen or nineteen he went to study law.

He chose the bar for his profession and to qualify for this he went through a five years apprenticeship in his father’s office.  His father was writer to the Signet in the Scotch capital.

For many years Scott learned between the legal and literary profession and at length decided in favour of the literary.  His works are much appreciated.  He wrote both prose and poetry.