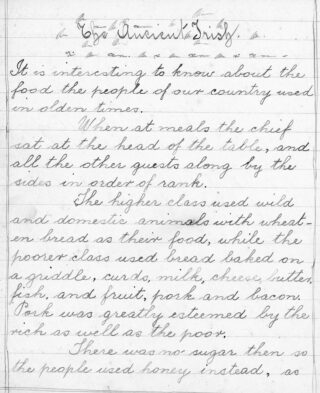 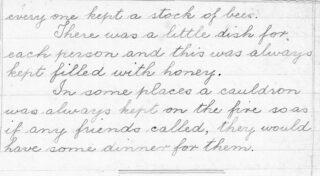 It is interesting to know about the food the people of our country used in olden times.

When at meals the chief sat at the head of the table and all the other guests along by the sides in order of rank.

The higher class used wild and domestic animals with wheaten bread as their food, while the poorer class used bread baked on a griddle, curds, milk, cheese, butter, fish and fruit, pork and bacon.  Pork was greatly esteemed by the rich as well as the poor.

There was no sugar then so the people used honey instead, as everyone kept a stock of bees.  There was a little dish for each person and this was always kept filled with honey.

In some places a cauldron was always kept on the fire so as if any friends called, they would have some dinner for them.