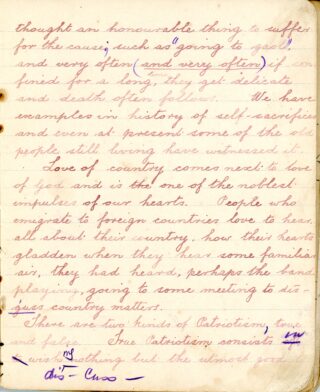 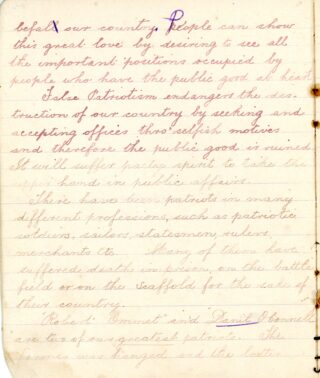 Patriotism is pure love of one’s country – helps us to make great sacrifices for the welfare of our beloved country.  It is thought an honourable thing to suffer for the cause; such a ‘going to gaol’ and very often if confined for a long time they get delicate and death often follows.  We have examples in history of self-sacrifices and even at present some of the old people still living have witnessed it.

Love of country comes next to love of God and is one of the noblest impulses of our hearts.  People who emigrate to foreign countries love to hear all about their country, how their hearts gladden when they hear some familiar air, they had heard, perhaps the band playing, going to some meeting to discuss country matters.

There are two kinds of Patriotism, true and false.  True Patriotism consists in wishing nothing but the utmost good to befall our country.  People can show this great love by desiring to see all the important positions occupied by people who have the public good at heart.

False Patriotism endangers the destruction of our country by seeking and accepting offices thro’ selfish motives and therefore the public good is ruined.  It will suffer party spirit to take the upper hand in public affairs.

There have been patriots in many different professions, such as patriotic soldiers, sailors, statesmen, rulers, merchants etc.  Many of them have suffered death in prison, on the battle field or on the scaffold for the sake of their country.

Robert Emmet and Daniel O’Connell are two of our greatest patriots.  The former was hanged and the latter suffered many severe trials.  All patriots are good men as a rule.  They are courageous, honourable, and self-sacrificing.