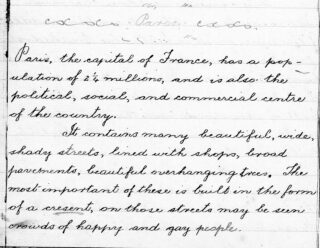 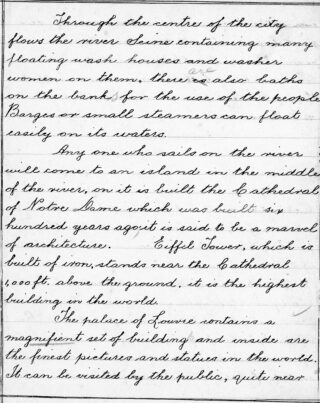 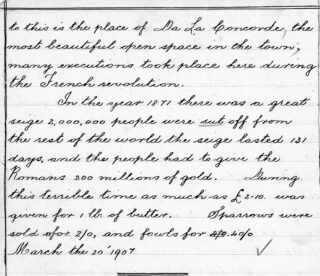 Paris, the capital of France, has a population of 21/4 million and is also the political, social and commercial centre of the country.  It contains many beautiful, wide, shady streets lined with shops, broad pavements, beautiful overhanging trees.  The most important of these is built in the form of a crescent, on these streets may be seen crowds of happy and gay people.

Through the centre of the city flows the river Seine containing many floating wash houses and washer women on them.  There are also baths on the banks for the use of the people.  Barges or small steamers can float easily on its waters.  Anyone who sails on the river will come to an island in the middle of the river.  On it is built the Cathedral of Notre Dame which was built six hundred years ago – it is said to be a marvel of architecture.  Eiffel Tower, which is built of iron, stands near the Cathedral, 1,000 ft above the ground, it is the highest building in the world.

The palace of Louvre contains a magnificent set of buildings and inside are the finest pictures and statues in the world.  It can be visited by the public.  Quite near to this is the place of Da La Concorde, the most beautiful open space in the town; many executions took place here during the French revolution.