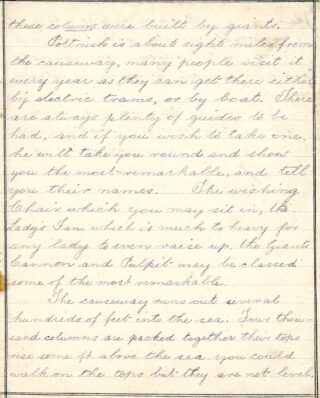 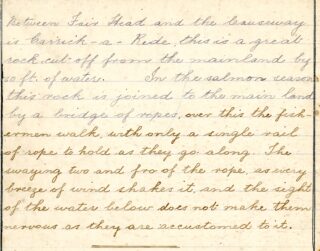 The Giant’s Causeway, situated in the north of Ireland, extends from Fair head to Lough Foyle.  It consists of lines of hard dark rock.  People think that these columns were built be giants.

Portrush is about eight miles from the causeway, many people visit it every year as they can get there either by electric trams or by boat.  There are always plenty of guides to be had and if you wish to take one, he will take you round and show you the most remarkable and tell you their names.  The wishing chair which you may sit in, the Lady’s Fan, which is much too heavy for any lady to even raise up, the Giants Cannon and Pulpit may be classed some of the most remarkable.

The causeway runs out several hundreds of feet into the sea.  Four thousand columns are packed together their tops rise some feet above the sea, you could walk on the tops but they are not level.  Between Fair Head and the causeway is Carrick-a-Ride, this is a great rock cut off from the mainland by 60 ft of water.  In the salmon season this rock is joined to the mainland by a bridge of ropes, over this the fishermen walk with only a single rail of hope to hold as they go along.  The swaying to-and-fro of the rope as every breeze of wind shakes it, and the sight of the water below does not make them nervous as they are accustomed to it.