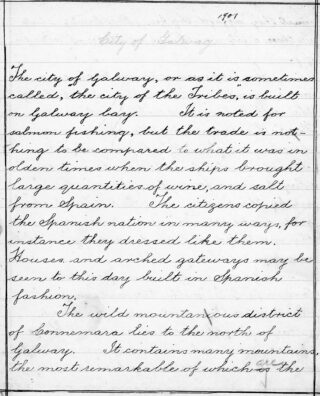 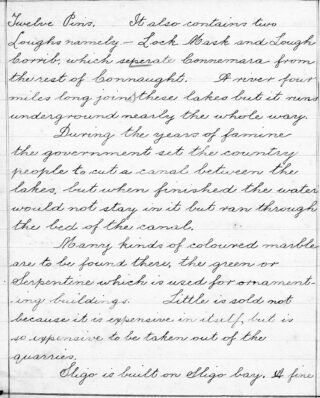 The city of Galway or as it is sometimes called ‘the city of the Tribes’ is built on Galway bay.  It is noted for salmon fishing but the trade is nothing to be compared to what it was in olden times when the ships brought large quantities of wine and salt from Spain.  The citizens copied the Spanish nation in many ways, for instance they dressed like them. Houses and arched gateways may be seen to this day built in Spanish fashion.

The wild mountainous district of Connemara lies to the north of Galway.  It contains many mountains the most remarkable of which are the Twelve Pins.  It also contains two loughs namely Lough Mask and Lough Corrib which separate Connemara from the rest of Connaught.  A river four miles long joins these lakes but it runs underground nearly the whole way.

During the years of famine the government set the country people to cut a canal between the lakes, but when finished the water would not stay in it but ran through the bed of the canal.  Many kinds of coloured marble are to be found there, the green or Serpentine which is used for ornamenting buildings.  Little is sold not because it is expensive in itself but is so expensive to be taken out of the quarries.

Sligo is built on Sligo bay.  A fine breed of sheep are kept in this county and also in Roscommon.  Cattle are exported to Liverpool and to Glasgow.  Irish tweed is largely manufactured, which industry is a great benefit to the country.