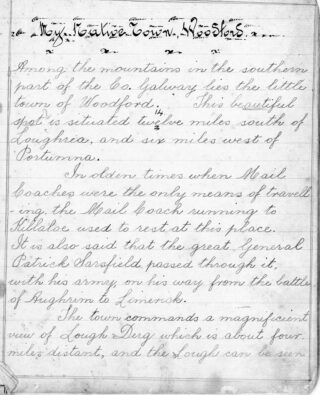 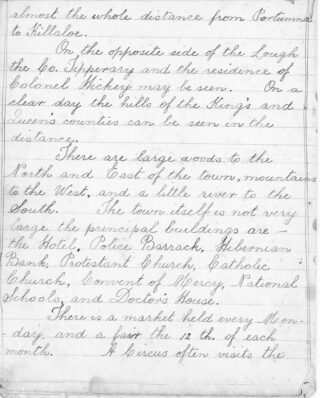 Among the mountains in the southern part of the Co Galway lies the little town of Woodford.  This beautiful spot is situated fourteen miles south of Loughrea and six miles west of Portumna.

In olden times when Mail Coaches were the only means of travelling, the Mail Coach running to Killaloe used to rest at this place.  It is also said that the great General Patrick Sarsfield passed through it with his army, on his way from the battle of Aughrim to Limerick.

The town commands a magnificent view of Lough Derg which is about four miles distant and the Lough can be seen almost the whole distance from Portumna to Killaloe.

On the opposite side of the Lough, the Co Tipperary and the residence of Colonel Hickey may be seen.  On a clear day the hills of the King’s and Queen’s counties can be seen in the distance.

There are large woods to the North and East of the town, mountains to the West and a little river to the South.  The town itself is not very large the principal buildings are – the Hotel, Police Barrack, Hibernian Bank, Protestant Church, Catholic Church, Convent of Mercy, National Schools and Doctor’s House.

There is a market held every Monday and a fair the 12th of each month.  A Circus often visits the town and there is sometimes a Concert about Christmas given by the local people.

The people are industrious and hard-working; on the whole it is a lively little place.